US House strikes down US President Trump's border emergency 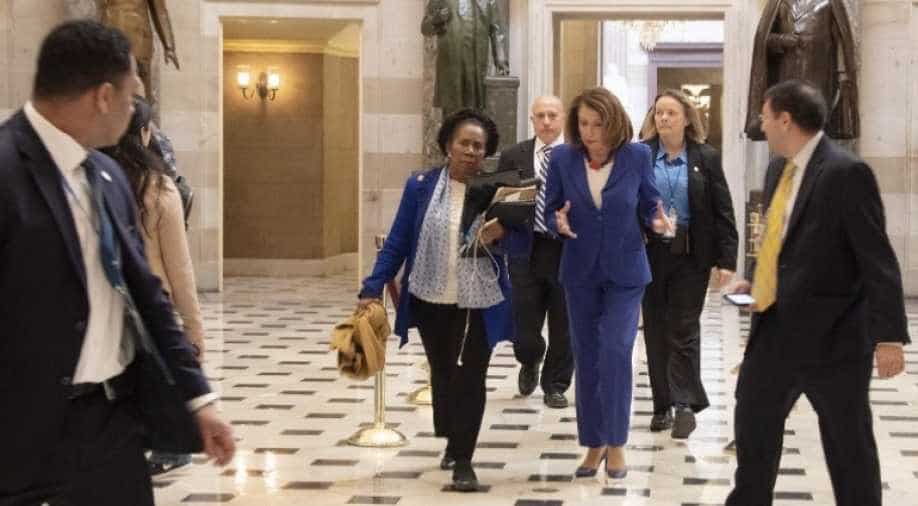 Dismissing a veto threat by the president, the Democratic-controlled House struck down Trump's emergency declaration by a comfortable margin of 245-182, sending the measure to the Republican-held Senate.

The US House of Representatives dealt a blow to President Donald Trump on Tuesday, approving a resolution blocking him from obtaining funding for a Mexican border wall through his declaration of a national emergency.

Dismissing a veto threat by the president, the Democratic-controlled House struck down Trump's emergency declaration by a comfortable margin of 245-182, sending the measure to the Republican-held Senate.

Thirteen Republicans joined Democrats in voting to "terminate" Trump's emergency declaration, which the Republican president issued on February 15 after failing to secure billions of dollars from Congress for the wall.

The emergency declaration would allow Trump to find funding for the Mexican border wall -- his signature campaign promise -- from other sources, notably the Pentagon budget for military construction projects.

The president has threatened to veto the resolution if it passes both the 435-member House and the 100-seat Senate, where Republicans hold a 53-47 edge and its prospects are uncertain.

Democrats have denounced the emergency declaration as a power grab by the president and a violation of the Constitution because it usurps the power of Congress to decide government spending.

At least two Senate Republicans -- Senator Susan Collins of Maine and Senator Thom Tillis of North Carolina -- have said they would back the resolution overturning Trump's emergency declaration.

Four Republicans would need to break ranks for the measure to pass the Senate but neither chamber is likely to be able to muster the two-thirds majority needed to override an expected presidential veto.

Should the measure clear both the House and the Senate and reach his desk, Trump would be faced with a stinging rebuke and cornered into issuing the first veto of his presidency.

Trump's national emergency declaration gives him access to billions of dollars to construct the border wall beyond the nearly $1.4 billion allocated by Congress.

"The president's power grab usurps that responsibility and fundamentally violates the balance of power envisioned by our founders," Pelosi said.

As several Republican senators expressed reservations about Trump's emergency declaration, the president sought to head them off.

"I hope our great Republican Senators don't get led down the path of weak and ineffective Border Security," Trump tweeted on Monday before heading for Vietnam for a summit with North Korean leader Kim Jong Un.

"Be strong and smart," he said. "Don't fall into the Democrats 'trap' of Open Borders and Crime!"

Republican senators Collins and Tillis have openly broken ranks already and others appeared to be wavering.

While Trump is "rightfully frustrated with Congress's inaction" on border security, the president made a mistake declaring an emergency, said Tillis.

"I have grave concerns when our institution looks the other way at the expense of weakening Congress's power," the Republican senator from North Carolina wrote in The Washington Post.

"The emergency course is not one I favour," Senator Mitt Romney of Utah said.

Veto '100 per cent' certain
Trump has said he is "100 per cent" certain to issue a veto if the House and Senate override his emergency declaration and the White House reiterated that on Tuesday.

"The current situation at the southern border presents a humanitarian and security crisis that threatens core national security interests and constitutes a national emergency," the White House said in a statement.

"The southern border is a major entry point for criminals, gang members, and illicit narcotics."

Dozens of Republican ex-lawmakers and a bipartisan group of former national security officers, including secretaries of defence and CIA directors, spoke out strongly against the emergency declaration on Monday.

In a joint declaration, the 58 national security officials warned of an abuse of the Constitution. The group includes former secretaries of state Madeleine Albright and John Kerry, along with George W Bush's undersecretary of state Nicholas Burns.

"Under no plausible assessment of the evidence is there a national emergency today that entitles the president to tap into funds appropriated for other purposes to build a wall at the southern border," they said.