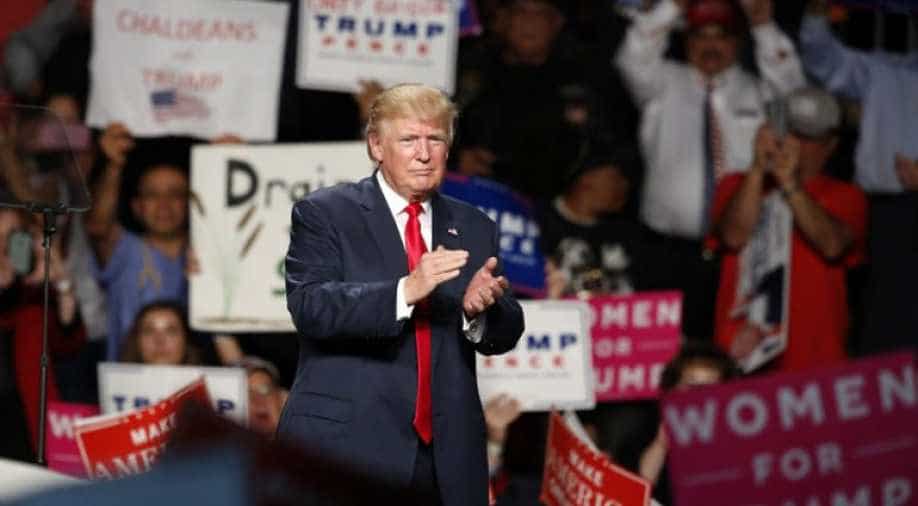 Donald Trump at a rally in Warren, Michigan on October 31. Photograph:( AFP )

As the race for the US presidency between Hillary Clinton and Donald Trump narrows, several social media sites are urging voters who support third party candidates in crucial battleground states to swap their vote across states.

Apps like #NeverTrump to TrumpTraders.org and MakeMineCount.org are working full swing to prevent Republican presidential candidate Donald Trump from entering the White House, Reuters reported. Trump trading is based on the "honour system" where voters express their political preference publicly.

Some people find trading partners the old-fashioned way through word-of-mouth.

John Stubbs, co-founder of the site Republicans for Clinton and Trump Traders, told Reuters that while he is no fan of Democrat Hillary Clinton, but he believes Trump would be a "catastrophe" and voting for third party candidates could inevitably help Trump win. So, for him Hillary Clinton is the only viable alternative.

"Once we all come to that realization, then you see Republicans who don't like Trump, people who support Gary Johnson, or Jill Stein, or Evan McMullin or the man on the moon, are all aligned around the exact same idea, which is that the worst case scenario for the country is Donald Trump," Stubbs said.

He claims that more than 15,000 participants have enrolled on his site where voters in the swing states can trade their third party candidate vote with a Clinton supporter from a "safe state."

A safe state is one where voters have little chance of influencing the outcome in America's electoral college system. The battleground states are where no single party or candidate has overwhelming support include Florida, North Carolina, Ohio, Pennsylvania and Texas.

Bret Lehne has agreed to vote for Green Party candidate Jill Stein in New York state in exchange for his cousin's friend voting for Clinton in the key swing state of Pennsylvania.

"Our vote doesn't really matter," he said of living in Democrat-leaning New York. "So if we can use it to further some other goal to trade it to Iowa, to trade it to Florida, that would be just making our democracy go a little further in this electoral college we're stuck in."

This is not the first time that vote trading has been attempted.

"If those sites had been successful in switching just 538 more people [in Florida], Al Gore would've been president. And that fact I think showed the power that these exchanges could potentially have," Stubbs told Reuters.

A host of critics online have slammed the practice as "undemocratic" and say it amounts to "rigging the election."

"It sort of instinctively has a little odour about it, but it isn't a rigging of the election," said Kenneth Gross, an election law expert and partner with Skadden Arps Slate Meagher & Flom. "It's just not anything that arises to the level of a legally actionable offense, because that sort of an agreement, really an informal agreement, is not quote, 'something of value,' like giving somebody dinner."

He, however, predicts that if vote trading were to become a major force in influencing outcomes, it could prompt challenges to previous court rulings.

The one thing vote traders will have to worry about is whether their trading partner will honour their end of the bargain when they enter that voting booth. There is always the option of ballot selfies though.