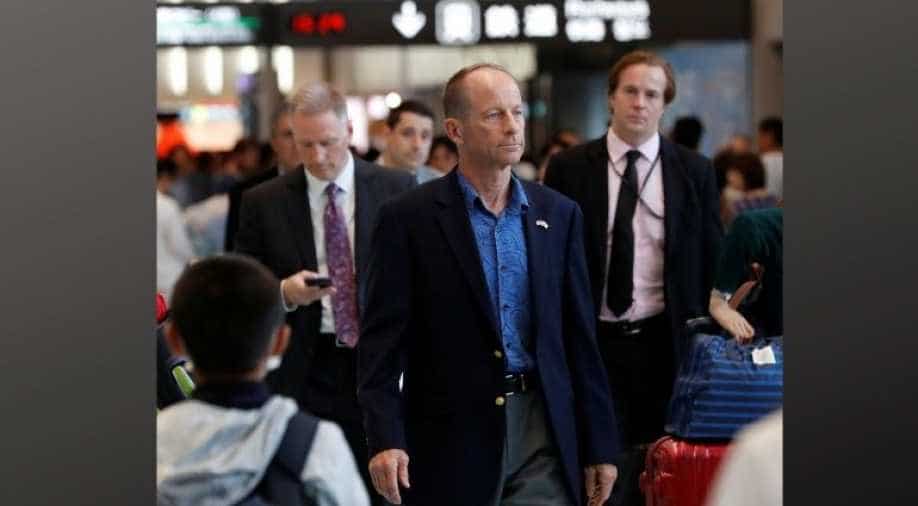 Stilwell told reporters in the South Korean capital, Seoul, that he took the situation seriously but did not elaborate on what steps Washington might be willing to take and said fundamentally it was up to South Korea and Japan to resolve their differences.

The United States will "do what it can do" to help defuse a worsening political and economic dispute between South Korea and Japan, a senior US diplomat said on Wednesday, as South Korea warned that the row would have global repercussions.

The United States has been hesitant to publicly wade into the feud between its allies, but the dispute, which threatens global supplies of memory chips and smartphones, has overshadowed the visit by David Stilwell, the top US diplomat for East Asia policy.

Stilwell told reporters in the South Korean capital, Seoul, that he took the situation seriously but did not elaborate on what steps Washington might be willing to take and said fundamentally it was up to South Korea and Japan to resolve their differences.

"We hope that resolution will happen soon," he said.

"The United States, as a close friend and ally to both, will do what it can do to support their efforts to resolve it."

Last week, Stilwell had told Japan's NHK broadcaster the United States would not intervene in the dispute, and instead encouraged dialogue between Washington's two biggest allies in Asia to settle it.

Simmering tension, particularly over a case for compensation of South Koreans forced to work for Japanese occupiers during World War Two, took a sharp turn for the worse this month, when Japan restricted exports of high-tech materials to South Korea.

Japan has denied that the dispute over compensation for labourers is behind the export curbs, even though one of its ministers cited broken trust with South Korea over the labour dispute in announcing the restrictions.

Instead, Japan has cited "inadequate management" of sensitive items exported to South Korea, with Japanese media reporting some items ended up in North Korea.

South Korea has denied that.

"It will adversely affect companies ranging from Apple, Amazon, Dell, Sony and billions of consumers all over the world," the source said, speaking on the condition of anonymity in order to discuss sensitive diplomatic issues.

If Japan went so far as to drop South Korea from its "white list" of countries with minimum trade restrictions, it would cause a "tremendous amount of problems" and strain ties between Japan, South Korea, and the United States, the source added.

When asked whether the South Korean government was considering retaliatory measures, the source said South Korea preferred to resolve the dispute diplomatically.

"The government is working on comprehensive plans to reduce the country's dependence on Japan's materials, components and equipment industries," he said at the start of a regular meeting of ministers responsible for various aspects of the economy.

"There is no change to our stance that we strongly urge South Korea to take appropriate and timely steps to comply with international law, and accept an arbitrator in accordance with the treaty," he said.

Japan believes the issue of compensation for its wartime actions was settled under a 1965 treaty.

When asked about media reports that Japan was considering seeking damages from South Korea if Japanese corporate assets were sold off to compensate labourers, Nishimura said the government would respond firmly and was considering options to "protect Japanese companies’ legitimate economic activities".

The dispute is also bleeding into North Korea policy, a key agenda item for Stilwell, who arrived on Tuesday.

The Japanese government has distanced itself from Japanese media reports that South Korea violated international sanctions by exporting banned goods to North Korea, saying it had said no such thing.

On Tuesday, a South Korean intelligence official fired back, telling lawmakers that Japan had been "lukewarm and passive" in enforcing U.N. sanctions.

Relations between the neighbours have long been plagued by memories of Japan’s 1910-45 colonisation of the Korean peninsula.