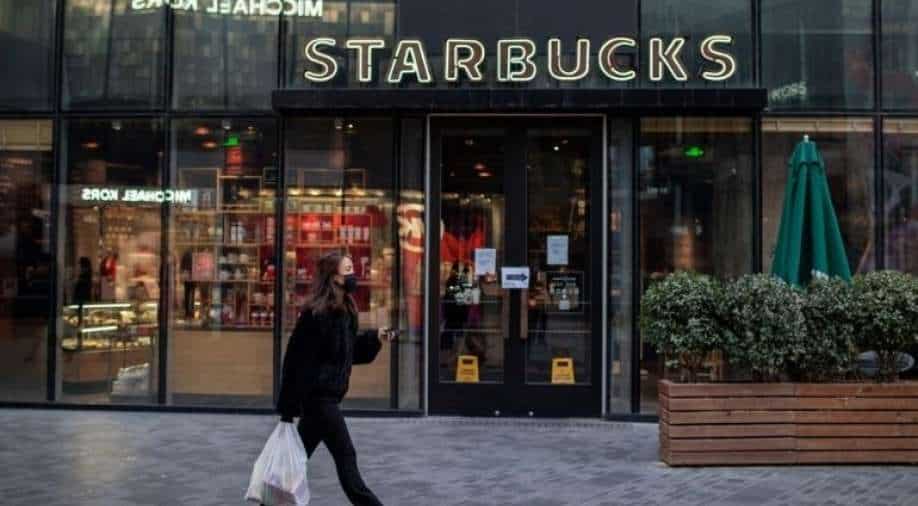 A woman, wearing a protective facemask, walks past a Starbucks coffee shop (back) in Beijing Photograph:( AFP )

A video of the company's employee replacing an expiration date sticker from a bottle of chocolate sauce has gone viral on China's Twitter-like platform, Weibo

US coffee giant Starbucks has been caught serving food with expired ingredients and violating food safety checks in China.

A video of the company's employee replacing an expiration date sticker from a bottle of chocolate sauce has gone viral on China's Twitter-like platform, Weibo.

It was recorded as part of an undercover investigation by the Beijing News newspaper at two stores in the eastern Chinese city of Wuxi.

The video that has garnered 270 million views, has triggered outrage among several customers.

Meanwhile, a store was found selling out-of-date pastries and cacao nibs during the sale.

The company, which has over 5000 outlets in mainland China, has acknowledged its mistake and pledged to launch a full inspection of food safety standards across them all.

"We deeply apologise and will actively improve the practices. We'll closely cooperate with the investigation and request continuous monitoring from the public and media," it said.

Kevin Johnson, the chief executive officer of the company has said that its loyalty is unwavering.

After inspection conducted by the Wuxi's Market Supervision Administration, 15 out of 82 stores were found to be violating the set standards.

According to the firm's latest earnings report, China is the largest market for Starbucks outside the United States.

With encouragement by Chinese President Xi Jinping, consumer nationalism is on the rise.

Chinese consumers and media have become more aggressive about protecting customer rights and monitoring the behaviour of big brands, especially from overseas.

Some targets, such as Canadian winterwear brand Canada Goose which drew complaints about its refund policies, have been subjected to government reprimands.