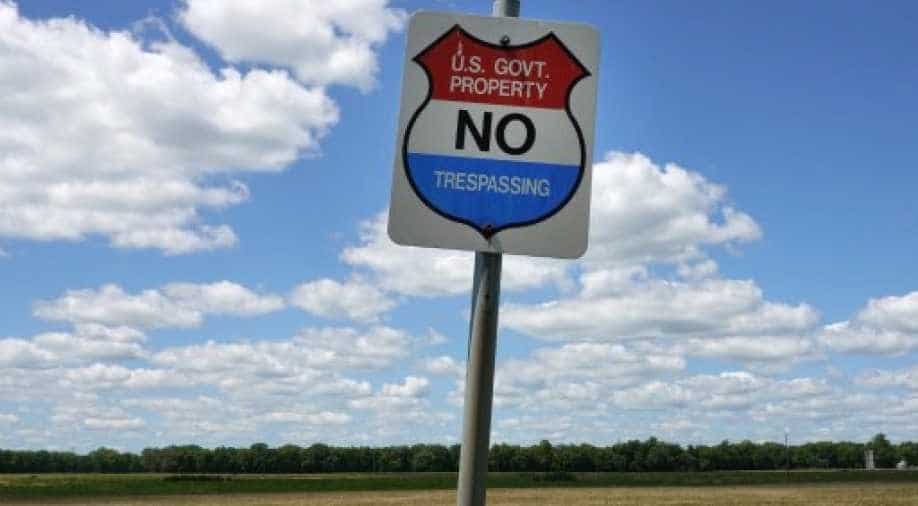 A sign sits on the edge of the property at the Federal Correctional Complex where Daniel Lewis Lee was executed on July 13, 2020 in Terre Haute, Indiana. Photograph:( AFP )

Daniel Lewis Lee, 47, was pronounced dead at 8:07 am (1207 GMT) at Terre Haute prison in the Midwestern state of Indiana, the Justice Department said.

A former white supremacist convicted of the 1996 murders of a family of three was put to death by lethal injection on Tuesday in the first federal execution in the United States in 17 years.

Daniel Lewis Lee, 47, was pronounced dead at 8:07 am (1207 GMT) at Terre Haute prison in the Midwestern state of Indiana, the Justice Department said.

Lee was the first of three federal inmates scheduled to die this week after President Donald Trump ordered a resumption of capital punishment at the federal level.

Lee and another man, Chevie Kehoe, were convicted in Arkansas in 1999 of the murders of gun dealer William Mueller, his wife, Nancy, and her eight-year-old daughter, Sarah.

According to prosecutors, the pair robbed Mueller to steal cash and guns to finance the founding of a white supremacist "Aryan Peoples Republic" in the Pacific Northwest.

"After robbing and shooting them with a stun gun, Lee duct-taped plastic bags around their heads, weighed down each victim with rocks, and drowned the family in the Illinois bayou," Attorney General William Barr said. "Today, Lee finally faced the justice he deserved."

Lee -- who had since renounced his white supremacist beliefs, according to his lawyers -- was sentenced to death while Kehoe received life in prison without the possibility of parole.

Lee, who was originally from Oklahoma, proclaimed his innocence in his final statement, according to a local newspaper, the Indianapolis Star.

"You're killing an innocent man," the paper quoted Lee as saying. "I bear no responsibility for the deaths of the Mueller family."

Lee's execution had been scheduled for Monday but was temporarily halted by a judge to allow for legal challenges to the drug that was to be used to put the federal inmates to death.

US District Judge Tanya Chutkan said the single drug, pentobarbital, may cause "extreme pain and needless suffering" -- and violate a constitutional ban on cruel and unusual punishment.

The Supreme Court, in a 5-4 ruling, lifted the lower court order overnight, however, and cleared the way for the federal executions.