US: Anti-abortion advocates rally in DC, with White House's blessing 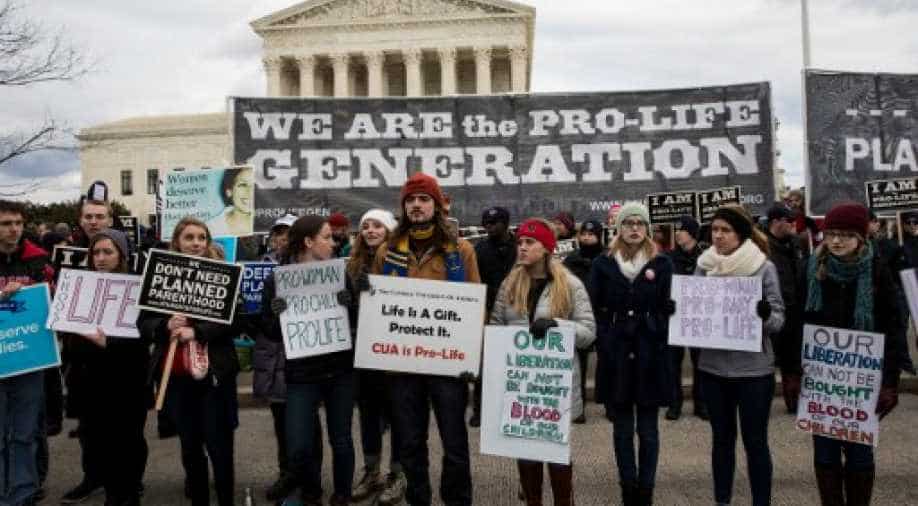 Pro-life demonstrators protest in front of the US Supreme Court during the 44th annual March for Life. Photograph:( AFP )

Optimistic anti-abortion advocates rallied in the US capital on Friday, with the White House throwing its weight behind the cause and Vice President Mike Pence hailing it as a "historic" time for the movement.

"Life is winning in America. And today is a celebration of that progress," Pence told the many thousands gathered on the National Mall, noting that Republican lawmakers -- who are overwhelmingly "pro-life" -- hold majorities in both houses of Congress.

"We've come to a historic moment in the cause of life, and we must meet this moment with respect and compassion for every American."

The first vice president to ever address the March for Life, Pence vowed that President Donald Trump's administration "will not grow weary, we will not rest until we restore a culture of life in America for ourselves and our posterity."

Trump tweeted that the march is "so important. To all of you marching -- you have my full support!"

The 44th annual anti-abortion march, billed as the world's largest pro-life rally, drew participants from all corners of the country exactly one week after Trump's inauguration.

"The unborn babies don't have a voice and someone has to stand up for what's right," said Katelyn Goodwin, 17, from Birmingham, Alabama who arrived in Washington with her church youth group after a 15-hour bus ride.

"If just one mother contemplating abortion will change her mind because of this march, then we've done something good," Goodwin said, waving a life-sized cardboard cutout of the pope.

The crowd -- which included numerous school groups -- toted signs that said "I am the pro-life generation," "Defund Planned Parenthood" and "Babies can feel joy in the womb."

Trump has already cheered abortion foes just days into his presidency. On Monday, he signed a decree barring US federal funding for foreign NGOs that support abortion services.

Next Thursday, he will announce his choice to fill an empty seat on the Supreme Court, with his nominee widely expected to staunchly oppose abortion rights.

Trump, a businessman new to politics, had previously been "pro-choice" but has veered right on the issue over the years, even saying at one point during the campaign that women who have illegal abortions should be punished. He later walked back that statement.

His stance on abortion will be bolstered by Pence, a deeply conservative former governor of Indiana who promotes traditional family values and is anti-abortion.

"Allow me to make it very clear -- we hear you. We see you. We respect you. And we look forward to working with you," she said.

Participants said they were not particularly political but rather driven by their strong beliefs.

"I think people that normally just sat back and said, 'Yeah, I'm pro-life' are beginning to act on it a little more and be more vocal," said Annette Vaske, a Catholic high school teacher from Iowa.

"They don't feel so threatened and intimidated. I think we just realized that there's more of us than we really think there are."

The march set off from the Washington Monument and ended with participants massing in front of the Supreme Court.

The march was happening days after the 44th anniversary of Roe v. Wade, the landmark Supreme Court decision that legalized abortionin 1973.

If Trump appoints a second conservative justice to the high court during his tenure, the overturning of Roe v. Wade could become reality -- even though seven of 10 Americans oppose scrapping the decision that established the right to an abortion in the first three months of pregnancy, a study by the Pew Research Center found this month.

Abortion opponents are also taking action at the local level, with US states enacting 338 restrictions on abortion between 2010 and 2016, according to the Guttmacher Institute, a research organization that supports abortion rights.

"This looming federal onslaught against a broad spectrum of reproductive health services," the institute said, "threatens a massive rollback of women's health, rights and autonomy."

The March for Life came nearly a week after the Women's March in Washington, which brought hundreds of thousands of demonstrators to the US capital to oppose Trump's attacks on a progressive agenda, including access to abortion services.

Washington authorities do not provide crowd figures for these events.

However, 92 buses obtained permits for the main parking site of RFK Stadium for Friday, compared to 450 buses that requested permits for Trump's inauguration and 1,200 for the Women's March, the Washington Post reported.