Urge to curb climate change spreads like 'Wildfire' across the Globe 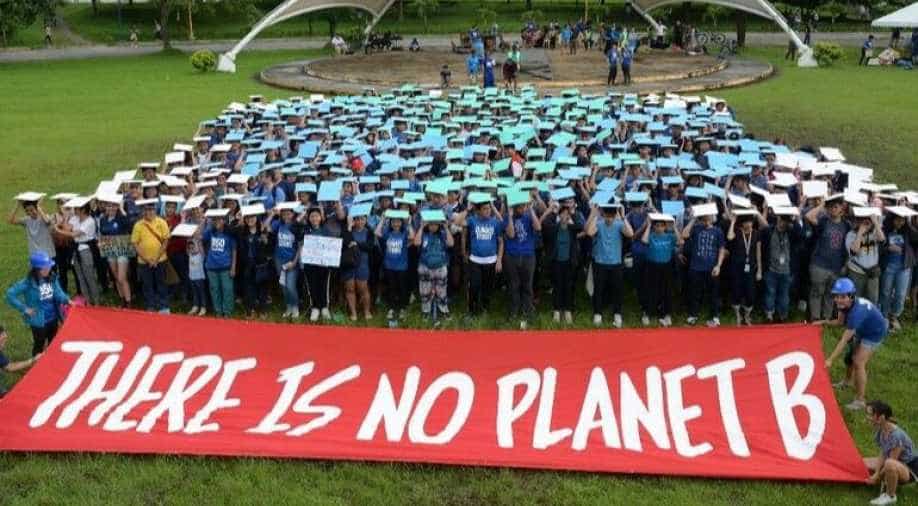 File Photo: Activists comprised of students and professionals gather in front of a banner as they take part in a world-wide climate rally, at the University of the Philippines' campus in Manila on September 20, 2019. Photograph:( AFP )

Inspired by Thunberg's weekly protests, millions of young people around the world have since demanded governments to take emergency action against global warming.

Climate-crisis is finally getting the traction that it needed. People across the world are organizing sit-ins in different parts, calling upon those in power to act right now.

Next global schoolstrike is on November 29th and in some countries December 6th. Please help spread the word! #fridaysforfuture pic.twitter.com/Y42aNiiKco

Inspired by Thunberg's weekly protests, millions of young people around the world have since demanded governments to take emergency action against global warming.

Protesters gather in Tokyo for a fresh round of global protests against climate change.

Rally majorly dominated by students is being called "Friday for future" a campaign started by Greta Thunberg.

The students are urging the government to save the planet for the coming generations.

Australians kicked off the movement early in the morning and an unprecedented number of people turned up on the streets of Sydney.

Remember, Australia has been reeling under one of the worst bushfires the country has seen.

The data for this year isn't out yet but officials have confirmed that 2018 and 2017 were Australia's third and fourth hottest years on record respectively.

Hundreds of students and victims of Australia's latest bushfires are staging a protest as we speak.

The protesters sat outside the New South Wales Liberal party headquarters to demand the government reject any new coal, oil or gas projects.

In the Indian city of Bhubaneshwar, thousands of people took to the streets with banners on a busy Friday morning.

The people of Bhubaneshwar are calling on the government to act right now.