United States still doubts that Russia is serious in talks with Ukraine: Blinken 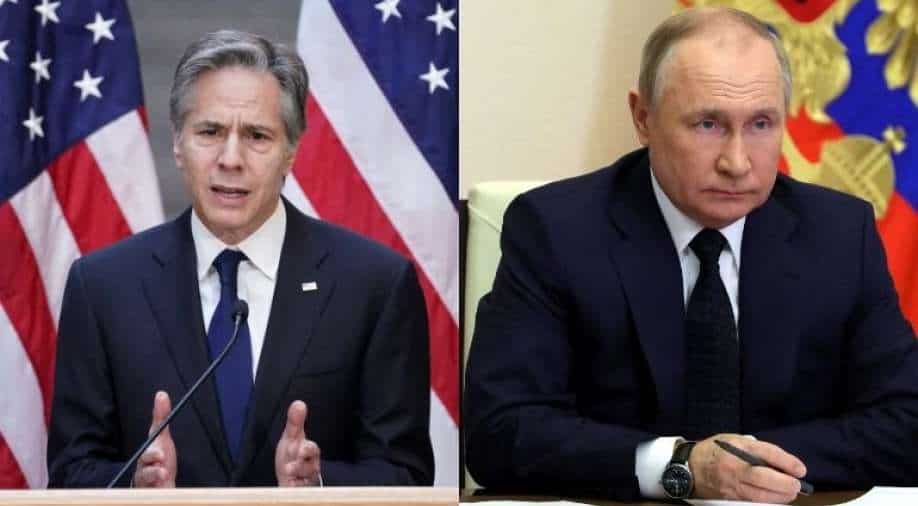 In this combination of images, US Secretary of State Antony Blinken can be seen along with Russian President Vladimir Putin. Photograph:( Reuters )

Russia’s military announced Tuesday it will 'fundamentally' scale back operations near Ukraine’s capital and a northern city, as talks brought the outlines of a possible deal to end the grinding war into view

The United States still doubts that Russia is serious in talks with Ukraine, US Secretary of State Antony Blinken said Tuesday, adding that Moscow should end its aggression now and pull its forces back.

"I've not seen anything to suggest that this is moving forward in an effective way because we have not seen signs of real seriousness" from Russia, Blinken said at a press conference in Morocco.

"What Russia is doing is the continued brutalisation of Ukraine and its people, and that continues as we speak."

"Putin is twisting the knife in the open wound of Ukraine in an attempt to force the country and its allies to capitulate," the read-out stated.

"The prime minister stressed to his fellow leaders that we should be unrelenting in our response."

Russia’s military announced Tuesday it will “fundamentally” scale back operations near Ukraine’s capital and a northern city, as talks brought the outlines of a possible deal to end the grinding war into view.

Deputy Defence Minister Alexander Fomin said the move was meant to increase trust in the talks after several rounds of negotiations failed to halt what has devolved into a bloody campaign of attrition.

While Russia portrayed it as a goodwill gesture, it comes as the Kremlin’s troops have become bogged down in the face of stiff Ukrainian resistance that has thwarted Putin’s hopes for a quick military victory.

Fomin said Moscow has decided to “fundamentally ... cut back military activity in the direction of Kyiv and Chernihiv” to “increase mutual trust and create conditions for further negotiations.”

Russia's chief negotiator, Vladimir Medinsky, said this was one of two steps Moscow was taking to de-escalate the 34-day-old conflict.
He said the other was that Russia would agree to a meeting between presidents Vladimir Putin and Volodymyr Zelensky to take place simultaneously if and when a peace treaty was initialed by their foreign ministers.

Ukrainian negotiators said they had proposed at the latest round of talks with Russia that Ukraine adopt neutral status in exchange for security guarantees, meaning Kyiv would not join military alliances or host military bases.

Medinsky said: "These proposals will be considered in the near future, reported to the president (Putin), and our response will be given."

Fomin said Russia had also called on Ukraine to eliminate what he called torture of captured Russian prisoners.

Pentagon spokesman John Kirby told CNN “we haven’t seen anything to corroborate” reports of Russia withdrawing significant forces from around Kyiv. “But what we have seen over the last couple of days is they have stopped trying to advance on Kyiv.”