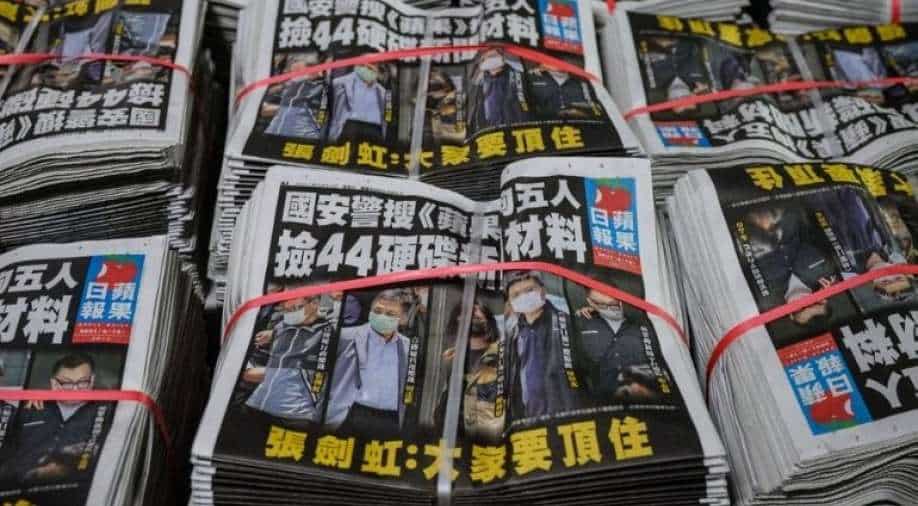 Freshly printed copies of the local Apple Daily newspaper are seen stacked in Hong Kong early on June 18, 2021, after Hong Kong police arrested the chief editor and four executives of the pro-democracy newspaper the day before, raiding its newsroom for a Photograph:( AFP )

Hong Kong’s outspoken pro-democracy publication Apple Daily announced its closure on Wednesday. The newspaper added that its final edition would be published “no later than Saturday” after it received confirmation from the board.

Another arrest on the same day for Apple Daily

On the same day, the lead editorial writer of Apple Daily was arrested under the security law. Just a few days earlier, five executives of the Daily were arrested by the police. According to AFP, the man who wrote columns for Apple Daily under the pseudonym Li Ping was arrested "on suspicion of colluding with foreign forces to endanger national security".

Apple Daily said that Li Peng was one of its top columnists and the lead writer of their editorials. Over the last five years, he had written nearly 800 commentaries. The last one published on Tuesday focused on academic freedoms in mainland China.

The publication has stood against Beijing for the longest time - reporting on China’s authoritarian leaders and extending support to Hong Kong’s pro-democracy movement.

Apple Daily’s owner Jimmy Lai is currently in jail and was among the first to be charged under the security law which was imposed in Hong Kong after 2019’s huge democracy protests.

Last Thursday, Apple Daily’s office was raided by 500 police officers for articles and articles that could invite sanctions from China. Five executives of the newspaper including chief editor Ryan Law and CEO Cheung Kim-hung were arrested for allegedly “colluding with foreign forces”. They were officially charged on Saturday.

In addition, asserts worth $2.3 million (HK $1.8 million) owned by Apple Daily were frozen using the security law, without which the newspaper couldn’t have continued publishing.

The security law was imposed on Hong Kong in June 2020 and allows authorities to freeze assets of any people or companies that are seen as a security threat without a court order.