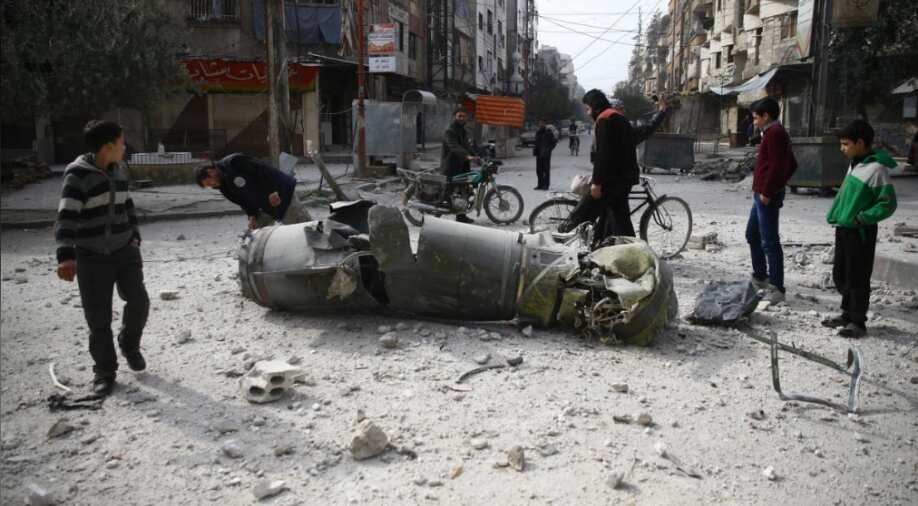 The UN Security Council on Friday delayed a vote on a demand for a 30-day ceasefire in Syria, where pro-government warplanes have been pounding the last rebel bastion near Damascus in one of the deadliest bombing campaigns of the seven-year civil war.

A draft resolution aimed at ending the carnage in the eastern Ghouta district and elsewhere in Syria will be put up for a vote in the 15-member council at noon (1700 GMT) on Saturday, Kuwait’s UN Ambassador Mansour Ayyad Al-Otaibi said.

Al-Otaibi said negotiations were centred on the language of one paragraph that specifically demands a cessation of hostilities for 30 days, possibly starting 72 hours after adoption, to allow aid access and medical evacuations.

“We have not been able to close the gap completely,” Olof Skoog, Sweden’s U.N. ambassador, told reporters. “We’re not going to give up. ... I hope that we will adopt something forceful, meaningful, impactful tomorrow.”

The delay followed a flurry of last-minute negotiations on the text drafted by Sweden and Kuwait after Russia, a veto-holding ally of Syrian President Bashar al-Assad, proposed new amendments.

“Unbelievable that Russia is stalling a vote on a ceasefire allowing humanitarian access in Syria,” U.S. Ambassador to the U.N. Nikki Haley posted on Twitter.

Previous ceasefires, however, have had a poor record of ending fighting in Syria, where Assad’s forces have gained the upper hand.

The towns and farms of eastern Ghouta have been under government siege since 2013, with shortages of food, water and electricity that worsened last year. Earlier on Friday, the densely populated enclave was bombed for a sixth straight day, witnesses said.

The civilian casualties and devastation there are among the worst in Syria since the government captured rebel-held parts of Aleppo in 2016. At least 462 people have been killed, including at least 99 children, and many hundreds injured, the Syrian Observatory for Human Rights monitoring group said on Friday.

Syrian state media reported one person was killed and 58 injured in rebel shelling of sites in Damascus, including a hospital.

Clouding any potential ceasefire is the Syrian government’s frequently used tactic of pushing rebels to surrender their strongholds after long sieges and military offensives.

Insurgents in eastern Ghouta have vowed not to accept such a fate, ruling out an evacuation of fighters, their families and other civilians of the kind that ended rebellions in Aleppo and Homs after the heavy bombardment in earlier years.

“We refuse categorically any initiative that includes getting the residents out of their homes and moving them elsewhere,” Ghouta rebel factions wrote in a letter to the Security Council.

Eastern Ghouta has 400,000 people spread over a larger area than other enclaves the government has recaptured. Late on Thursday, government aircraft dropped leaflets urging civilians to depart and hand themselves over to the Syrian army, marking corridors through which they could leave safely.

Leading up to the Security Council vote, all eyes have been on Russia amid concerns it would block the resolution or seek to water it down. Moscow has a history of standing in the way of Security Council measures that would harm Assad’s interests.

Germany and France were among the nations to ratchet up the pressure on Russia, with German Chancellor Angela Merkel and French President Emmanuel Macron asking Russian President Vladimir Putin to support the resolution.

Damascus and Moscow say they only target militants. They have said their main aim is to stop rebel shelling of the capital, and have accused insurgents in Ghouta of holding residents as human shields.

The Britain-based Syrian Observatory for Human Rights said government planes and artillery hit Douma, Zamalka and other towns across the enclave in the early hours of Friday.

There was no immediate comment from the Syrian military.

Medical charities say more than a dozen hospitals were hit, making it nearly impossible to treat the wounded.

A witness in Douma who asked not to be identified said by telephone that the early morning bombing was the most intense so far. Another resident, in the town of Hamouriyeh, said the assault had continued “like the other days.”

“Whenever the bombing stops for some moments, the Civil Defence vehicles go out to the targeted places. They work to remove the debris from the road,” Bilal Abu Salah said.

The Civil Defence there said its rescuers rushed to help the wounded after strikes on Hamouriyeh and Saqba. The emergency service, which operates in rebel territory, says it has pulled hundreds of people out from under rubble in recent days.

Hamza Birqdar, the military spokesman for the Jaish al-Islam rebel faction, said it had thwarted nine attacks by pro-government militias trying to storm a front in the southeast of Ghouta.