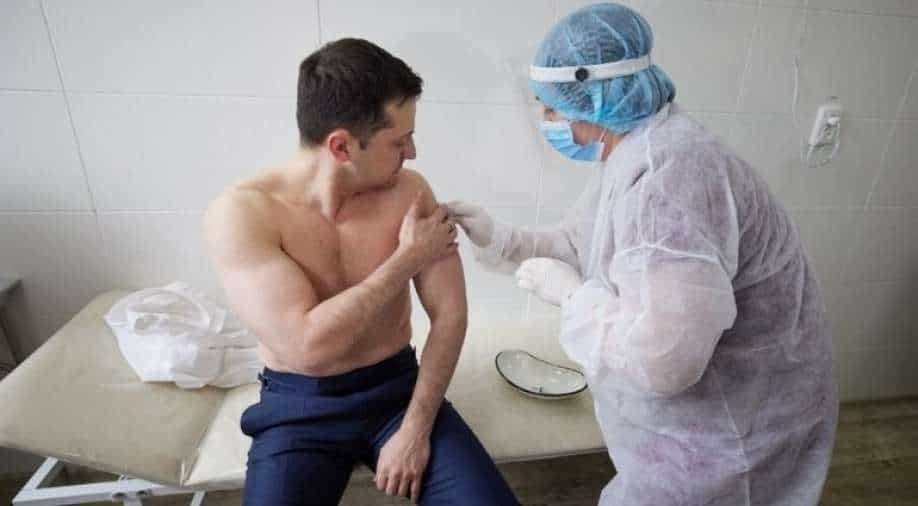 Ukrainian President Volodymyr Zelensky receives a dose of the AstraZeneca/Oxford vaccine against the coronavirus disease at a hospital in Ukraine's war-torn east on March 2, 2021. Photograph:( AFP )

Ukrainian President Volodymyr Zelensky on Tuesday received a coronavirus vaccine injection in the war-torn east, saying there was nothing to fear and urging others to follow his example

Ukrainian President Volodymyr Zelensky on Tuesday received a coronavirus vaccine injection in the war-torn east, saying there was nothing to fear and urging others to follow his example.

The 43-year-old Ukrainian leader released a topless picture of himself receiving his jab, with a health worker disinfecting his shoulder.

"There is nothing to be afraid of. I am setting a personal example," Zelensky said in a post on Instagram, ahead of talks with visiting European Council chief Charles Michel.

"Did this on the frontline with our soldiers," he added on Twitter.

Last week the ex-Soviet nation of 40 million people launched a nationwide vaccination campaign, following delays that sparked anger against the government in one of Europe's poorest countries.

Ukraine has banned the use of one of the most popular vaccines in former Soviet republics, the Russian-developed Sputnik V jab, and instead has sought to source vaccine doses elsewhere.

It last week received 500,000 doses of the Oxford/AstraZeneca vaccine, marketed under the name Covishield and produced in India.

Zelensky said he had received an AstraZeneca dose, in an apparent attempt to overcome scepticism towards the jab from the British-Swedish firm.

"I believe it's a quality vaccine, one of the best in the world," he said in a statement.

In November last year, Zelensky tested positive for the coronavirus and spent two weeks in self-isolation, first at home and then in a clinic. He said Tuesday that his antibody levels were "very low."

Ukraine's health ministry said that nearly 5,000 people had been vaccinated in the first six days of the vaccination campaign.

More than 1.3 million infections have been recorded in Ukraine and more than 26,000 people have died of the virus.