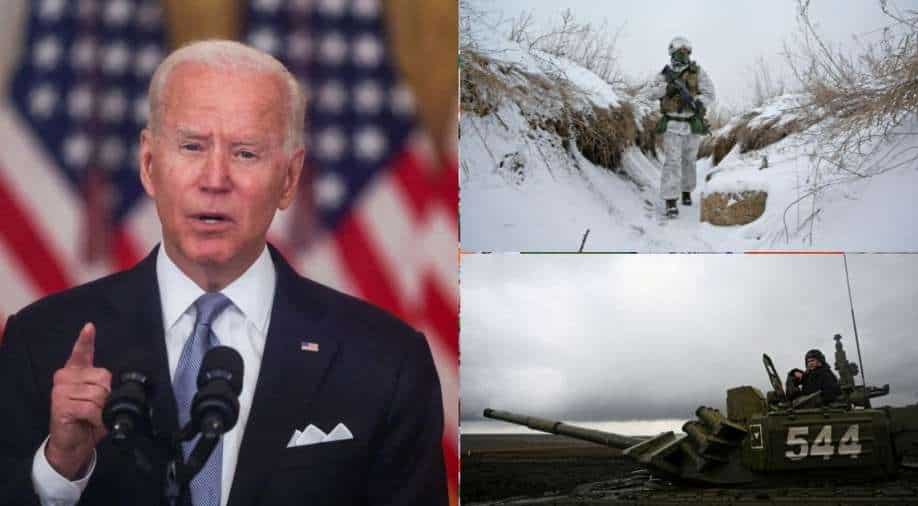 The Western countries have stepped up military preparations.   Photograph:( Reuters )

NATO forces have gathered against a potential invasion - creating a war-like situation. On the other hand, Russian state TV has played down the entire crisis

The United States President Joe Biden on Tuesday (January 25) said that he will think about imposing personal sanctions on Russian President Vladimir Putin if he invades Ukraine.

Amid heightened tensions at the Russia-Ukraine border, the Western countries fear that Putin is plotting to invade the country it invaded in 2014.

The crisis got escalated drastically after Russia amassed tens of thousands of troops on its borders with Ukraine. However, Russia denies it is planning an attack.

Russia has said it could take unspecified military action if a list of demands is not met, including a promise from NATO never to admit Ukraine as a member.

In the aftermath, the West tried to de-escalate the situation and now has stepped up military preparations and made plans to shield Europe from a potential energy supply shock.

Now, Biden has come up with the rare sanctions threat as NATO places forces on standby and reinforces eastern Europe with more ships and fighter jets in response to Russia's troop build-up near its border with Ukraine.

While addressing a presser, Biden was asked if he would see himself imposing sanctions on Putin directly. "Yes," he responded. "I would see that."

Direct US sanctions on foreign leaders are rare but not unprecedented. Others who have faced sanctions include Venezuela's Nicolas Maduro, Syria's Bashar al-Assad and Libya's Muammar Gaddafi.

On one side, NATO forces have gathered against a potential invasion - creating a war-like situation. On the other hand, Russian state TV has played down the entire crisis.

Russian state TV - vital for the Kremlin's public messaging over 11 time zones - has often focused in recent days on other issues such as Russian athletes' hopes for the Beijing Winter Olympics or rising Omicron cases.

"At the moment, there's no sense the enemy is at the door and that we're starting a war soon... That's not happening at all," said one Russian media analyst, who spoke on condition of anonymity.

As mentioned by Reuters, Russian state media say Western "panic" is fuelling the tensions, along with the US troop reinforcements to the region and arms supplies to Kyiv while reporting the crisis.

They do not mention the presence of around 100,000 Russian troops near Ukraine's border. "They've invented it (the Russian threat)... The Americans have been scaring themselves about a Russian invasion for months," a reporter for the Vesti news programme told viewers.