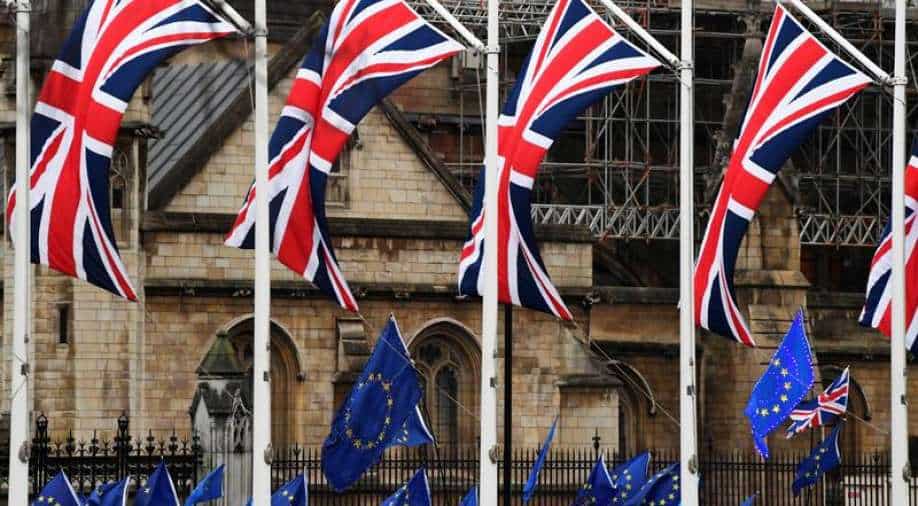 The UK's chief negotiator called on the European Union to show 'pragmatism and common sense', instead of threatening to retaliate, as the two sides meet to resolve differences over the deal that was supposed to keep trade flowing after Brexit.

David Frost made the comments after his EU counterpart said the bloc was ready to act 'firmly and resolutely' if the UK fails to honor its commitments under the divorce agreement.

The two men are scheduled to meet on Wednesday in London amid rising tensions over implementation of the deal in Northern Ireland, the only part of the UK that shares a land border with the bloc.

Central to the talks are provisions of the deal that effectively created a customs border between Northern Ireland and the rest of the UK, angering many pro-British residents of the island.

While Britain has called for compromise, the EU says the new rules are needed to protect the bloc's single market. Both sides fear the tensions could fuel a return to violence in Northern Ireland.

"Further threats of legal action and trade retaliation from the EU won't make life any easier for the shopper in Strabane, who can't buy their favorite product," Frost said, referring to a town in Northern Ireland.

"What is needed is pragmatism and common sense solutions to resolve the issues as they are before us. This work is important, and it is ever more urgent."

The divorce deal, which took effect on January 1, included a number of grace periods that gave Britain time to put in place new systems to check a variety of goods coming into Northern Ireland to ensure they comply with EU rules. Those grace periods are now ending, causing headaches for businesses and consumers in Northern Ireland.

The UK angered Brussels earlier this year when it unilaterally extended the grace period covering many supermarket items, delaying the required inspections for six months. The EU has threatened legal action over that decision.

The Daily Telegraph, a British newspaper, reported on Tuesday that the UK may also extend the grace period covering chilled meats such as sausages and ground beef, which is scheduled to end at the end of this month.

"If this does not happen, and if the UK takes further unilateral action over the coming weeks, the EU will not be shy in reacting swiftly, firmly and resolutely to ensure that the UK abides by its international law obligations," Sefcovic wrote on Tuesday in the Telegraph.

While Sefcovic didn't specify what those actions might be, the Times of London quoted an unidentified EU official as saying the bloc was ready to impose trade sanctions and retaliatory tariffs.

Sefcovic described the so-called Northern Ireland protocol as an opportunity that will give the region access to more than 500 million customers in both the UK and European Union. But Frost said compromise is needed to make this a reality.

The UK has sent 10 papers to the EU offering solutions to many of the issues that divide the two sides, but has received no written responses from the bloc, he said.

"When I meet Maros Sefcovic later today my message will be clear: time is short and practical solutions are needed now to make the Protocol work," Frost said.

"We are working very hard to try and resolve these issues consensually. Time is starting to run out and solutions are urgently needed," he added.