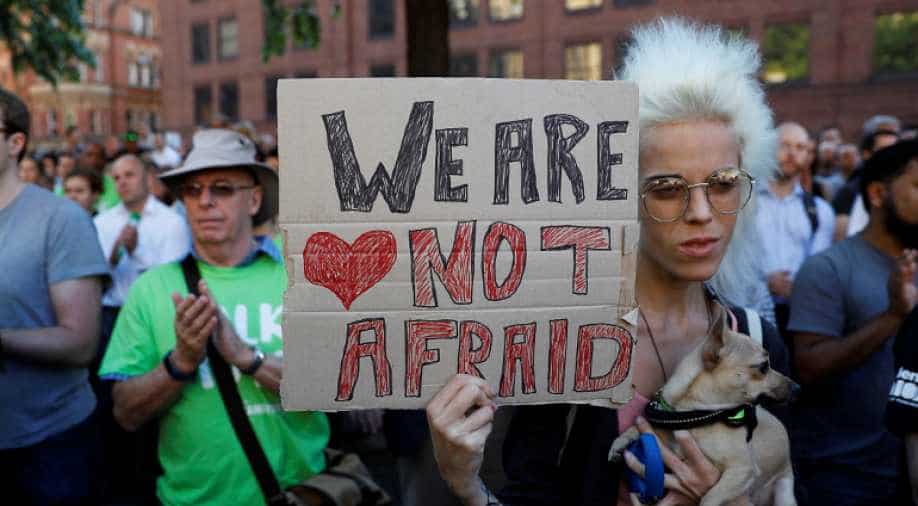 Soldiers will be deployed to key sites in Britain to boost security. Photograph:( Reuters )

Soldiers will be deployed to key sites in Britain to boost security as the country raised its terror threat to the highest level of "critical" following a suicide attack in Manchester that killed 22 people, including children.

Police on Tuesday said they believed British-born Salman Abedi, aged 22, carried out Britain's deadliest bombing in nearly 12 years and Prime Minister Theresa May said another attack could be imminent.

May said it was possible a wider group was linked to the bombing at a crowded concert hall, prompting the increase in security a little more than two weeks before a national election.

An independent body which sets the threat level recommended it be raised to "critical" from "severe" for the first time since June 2007.

"This means that their assessment is not only that an attack remains highly likely but that a further attack may be imminent," May said in a televised statement from her Downing Street Office after a meeting of the government's crisis response committee.

"Armed police officers responsible for duties such as guarding key sites will be replaced by members of the armed forces ... You might also see military personnel deployed at certain events, such as concerts and sports matches."

Britain's top anti-terrorism officer Mark Rowley said events would only go ahead when it was safe to do so and the decision to raise the threat level had been made on a "precautionary basis" due to gaps in police knowledge while the investigation continues.

He told reporters he hoped that, as has previously been the case, the level would not stay at critical for a long period.

The Times newspaper reported that Abedi had arrived back in Britain from Libya recently. He is believed to have travelled by train from London before the attack, U.S. officials said.

The attacker set off his improvised bomb as crowds streamed out of the Manchester Arena after a pop concert by Ariana Grande, a U.S. singer especially popular with teenage girls.

Islamic State, now being driven from territories in Syria and Iraq by Western-backed armed forces, claimed responsibility for what it called a revenge attack against "Crusaders." But there appeared to be contradictions in its account of the operation.

Witnesses related the horror of the blast, which unleashed a stampede just as the concert ended at Europe's largest indoor arena, full to its capacity of 21,000.

"We ran and people were screaming around us and pushing on the stairs to go outside and people were falling down, girls were crying, and we saw these women being treated by paramedics having open wounds on their legs ... it was just chaos," said Sebastian Diaz, 19. "It was literally just a minute after it ended, the lights came on and the bomb went off."

A video posted on Twitter showed fans, many of them young, screaming and running from the venue. Dozens of parents frantically searched for their children, posting photos and pleading for information on social media.

Singer Grande, 23, said on Twitter she was devastated: "broken. from the bottom of my heart, i am so so sorry. i don't have words." She returned to the United States on Tuesday, Britain's Daily Mail newspaper reported, as questions lingered over whether she would continue her European tour.

The attack was the deadliest in the UK since four British Muslims killed 52 people in suicide bombings on London's transport system in 2005. But it will have reverberations far beyond British shores.

Attacks in cities including Paris, Nice, Brussels, St Petersburg, Berlin and London have shocked Europeans already anxious over security challenges from mass immigration and pockets of domestic Islamist radicalism. Islamic State has repeatedly called for attacks as retaliation for Western involvement in the conflicts in Syria and Iraq.

While claiming responsibility on its Telegram account, the group appeared to contradict the police description of a suicide bomber. It suggested explosive devices were placed "in the midst of the gatherings of the Crusaders".

"What comes next will be more severe on the worshippers of the cross," the Telegram posting said.

It did not name the bomber, as it usually does in attacks it has ordered, and appeared also to contradict a posting on another Islamic State account, Amaq, which spoke of "a group of attackers". That reference, however, was later removed.

May described the attack as an act of "sickening cowardice". Campaigning for the June 8 election, which opinion polls suggest May's Conservative Party is on track to win, has been suspended as a mark of respect.

May spoke to U.S. President Donald Trump, French President Emmanuel Macron and several other foreign leaders on Tuesday about the attack, her spokesman said. She also visited the police headquarters and a children's hospital in Manchester.

The White House said Trump had agreed with May during their telephone conversation that the attack was "particularly wanton and depraved".

Macron and senior French ministers walked to the British embassy in Paris to sign the condolence book.

German Chancellor Angela Merkel said it "will only strengthen our resolve to ... work with our British friends against those who plan and carry out such inhumane deeds".

The U.N. Security Council condemned "the barbaric and cowardly terrorist attack" and expressed solidarity with Britain in the fight against terrorism.

Queen Elizabeth held a minute's silence at a garden party at Buckingham Palace in London.

Manchester remained on high alert, with additional armed police drafted in. London Mayor Sadiq Khan said more police had been ordered onto the streets of the British capital.

Police raided a property in the Manchester district of Fallowfield where they carried out a controlled explosion.

On Tuesday evening thousands of people attended a vigil in central Manchester in sombre but defiant mood.

"There's hard times again in these streets of our city, but we won't take defeat and we don't want your pity, because this is the place where we stand strong together with a smile on our face, Mancunians forever," local poet Tony Walsh said in a poem he read to the crowd that drew loud cheers and applause.

British police do not routinely carry firearms, but London police said extra armed officers would be deployed at this weekend's soccer cup final at Wembley and rugby at Twickenham. Security would be reviewed also for smaller events.

In March, a British-born convert to Islam ploughed a car into pedestrians on London's Westminster Bridge, killing four people before stabbing to death a police officer who was on the grounds of parliament. The man was shot dead at the scene.

In 2015, Pakistani student Abid Naseer was convicted in a U.S. court of conspiring with al Qaeda to blow up the Arndale shopping centre in the centre of Manchester in April 2009.