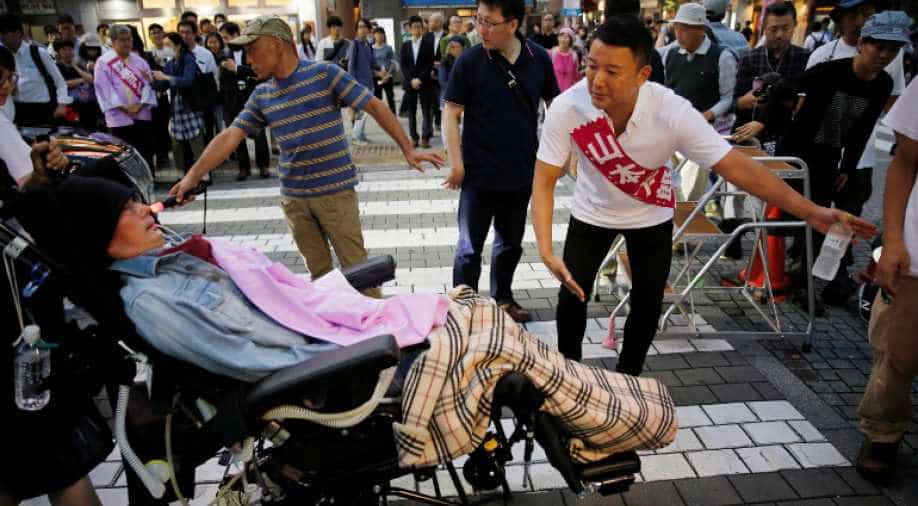 Reiwa Shinsengumi's leader and a candidate for Japan's July 21 upper house election Taro Yamamoto escorts disabled candidate Yasuhiko Funago, who has amyotrophic lateral sclerosis (ALS), as he makes his way to a stage during an election rally in Tokyo, Japan, July 12, 2019. Photograph:( Reuters )

Two wheelchair-bound candidates won seats in Japan`s upper house vote on Sunday, media projections showed, a sign of changing attitudes towards disabled people in a country where they have long been encouraged to stay in the shadow

Two wheelchair-bound candidates won seats in Japan`s upper house vote on Sunday, media projections showed, a sign of changing attitudes towards disabled people in a country where they have long been encouraged to stay in the shadow.

Yasuhiko Funago, a vice president of a company that provides elderly and patient care, has Amyotrophic Lateral Sclerosis (ALS), a progressive neurological disease in which patients gradually lose control of most of their muscles.

Although a lower house lawmaker in the past was diagnosed with ALS after winning a seat, no one had previously begun a career in parliament after being diagnosed with the disease, according to the Japan ALS Association.

The other candidate is Eiko Kimura, who has cerebral palsy. Both of them were running from a small opposition group, the Reiwa Shinsengumi.

"We will of course have specialists accompany them and look after them," Taro Yamamoto, head of the Reiwa Shinsengumi, told a commercial broadcaster after polls closed on Sunday evening.

"But primary responsibility to take care them falls on parliament, which will be called on to provide them with reasonable accommodation."

Besides Funago and Kimura, Rie Saito, who lost her hearing as an infant, was running from the largest opposition Constitutional Democratic Party of Japan.

Media had not yet called her race, but if Saito wins, she will be the first deaf member of parliament in post-World War Two Japan.

Experts in disability issues said before Sunday`s election that these rare candidacies were welcome developments but also were intended to signal greater change is needed, even as Japan prepares to host the Paralympic Games next year.

During the election campaign, Funago and Kimura said they would seek education reforms as lawmakers to help create a society where people with disabilities can lead better lives.

People with physical or intellectual disability as well as with mental disorder, account for about 8% of the Japanese population.