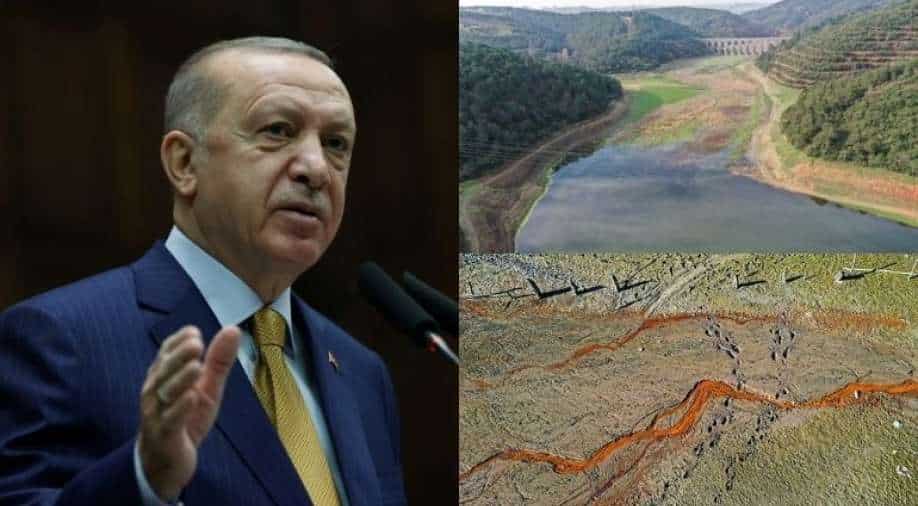 Major cities in the country are facing serious water shortages. Poor rainfall has led to a dry winter season and the country is staring at its most severe drought in a decade.

Turkey is facing a major drought situation as the country's water levels are at a critically low level. Experts blame it on the Erdogan government's policies.

Major cities in the country are facing serious water shortages. Poor rainfall has led to a dry winter season and the country is staring at its most severe drought in a decade.

Without rainfall, some reservoirs could run out within months. Istanbul has about 45 days of water left. The city of 17 million people is struggling with water reservoirs at their lowest levels in 15 years, on the other hand, the capital city of Ankara has about 110 days.

Officials warn that the situation is dangerous and there is no solution in sight. Turkey has always been a 'water-stressed' country. This is when the demand exceeds the available amount of water. For decades, Turkey has faced several severe droughts. Most of them were caused by a combination of factors. Population growth, industrialisation, and climate change.

While the warning signs have been apparent, Turkey has chosen to ignore them over the years. It has long prioritised economic growth over environmental concerns. Vital water basins have given way to developmental projects. Forests and agricultural lands have been cleared and urban infrastructures have taken their place.

While many hold climate change responsible, experts believe that the country's policies are also to blame. Turkey's growing population has been wasteful of water and very few steps have been taken to fix the damaged water cycle.

Authorities have now jumped in with conservation measures. President Recep Tayyip Erdogan has urged for conservation. But it may be too late as saving and recycling water can only sustain for a few more months.

What turkey ultimately needs is a lot of rainfall or else the country will be left to ration water soon. But turkey's story is just the tip of the iceberg. A quarter of the world's major cities face water stress and many cities could risk running out of water soon.

While Cairo is situated on the banks of the Nile, the city may face critical water shortages by 2025.

Sao Paulo, Mexico City, Tokyo, and Moscow are all dealing with the same problem.

As for India, major cities like Delhi and Chennai deal with water shortage every year.