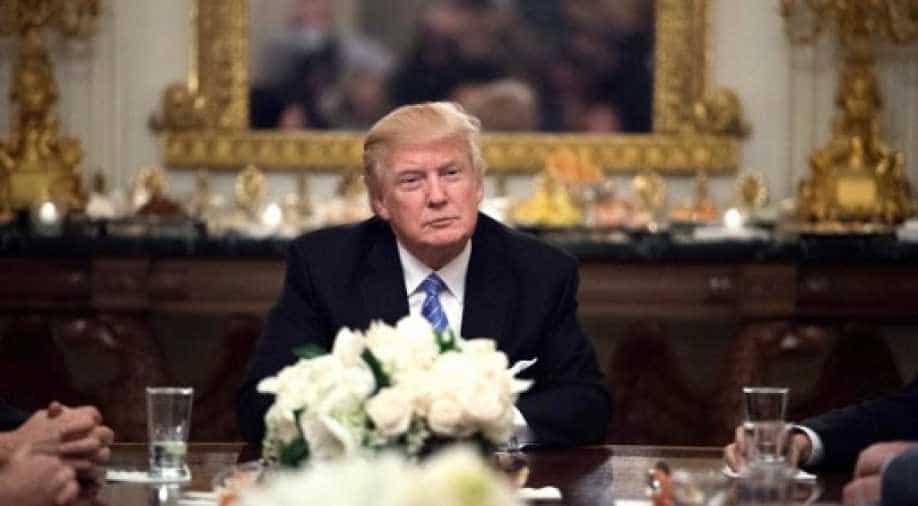 It was not clear what Trump meant by "the Feds," or what kind of unilateral government intervention he could order to address the gun violence issue. Photograph:( AFP )

US President Donald Trump vowed on Tuesday to bring federal intervention to bear in Chicago to quell the "carnage" of gun violence plaguing America's third-largest city unless local officials can curb the murder rate on their own.

Trump appeared to be seising on a story published by the Chicago Tribune on Monday reporting at least 228 people were shot in the city so far this year, up 5.5 per cent from the same period last January, with at least 42 homicides to date, an increase of 23.5 per cent.

A Chicago Police Department spokesman, Frank Giancamilli, disputed the Tribune's numbers, saying there were 182 shootings in the city from January 1 to January 23, "which is exactly flat from last year". He said homicides have numbered 38 to date, compared with 33 for this time in 2016.

Still, the Tribune said its latest figures put the city on track to exceed last January's 50 homicides, the most for that month in at least 16 years. Chicago's homicide toll for 2016 as a whole reached 762 killings, the most in 20 years.

It was not clear what Trump meant by "the Feds," or what kind of unilateral government intervention he could order to address the issue.

Chicago Police Superintendent Eddie Johnson responded by saying he was "more than willing to work" in partnership with US law enforcement and to help "boost federal prosecution rates for gun crimes in Chicago".

Civil rights leader Rev Jesse Jackson said in a Twitter post: "We need a plan, not a threat. We need jobs, not jails."

Urban violence, drug trafficking and poverty were recurring themes in Trump's campaign appearances, and he periodically has cited Chicago as an example of rising inner city crime, which ticked up nationally in 2016 after a two-decade decline.

Speaking in his inauguration address about drugs and crime that "have stolen too many lives," Trump declared: "This American carnage stops right here and stops right now."

Chicago, with a population of 2.7 million, posted more shootings and homicides last year than any other US city, according to FBI and Chicago police data, and its murder clearance rate, a measure of solved and closed cases, is one of the country's lowest.

On January 2, Trump tweeted about Chicago's effort to lower its murder rate, saying: "If Mayor can't do it he must ask for Federal help!"

A spokesman for Mayor Rahm Emanuel, former chief of staff to Trump's Democratic predecessor, Barack Obama, said then that the mayor welcomed the prospect of working with Trump and that the two men had previously spoken together on the issue.