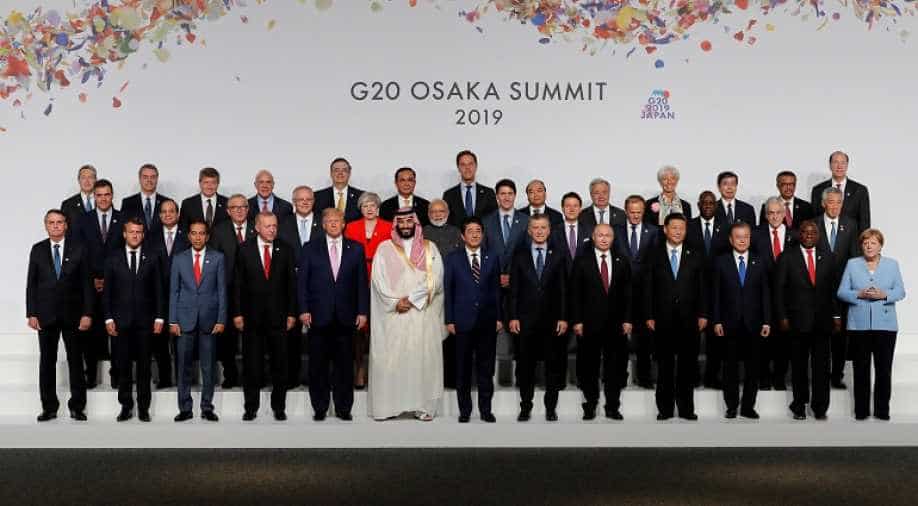 US President Donald Trump made clear on Friday that trade was a top priority at a summit of leaders of Group of 20 nations, as Chinese leader Xi Jinping warned against rising protectionism and India and Russia defended multilateral trade rules.

"We actually sell Huawei many of its parts," Trump said. "So we’re going to be discussing that and also how India fits in. And we’ll be discussing Huawei."

A White House official said Trump wanted to promote to Abe and Modi "a resilient quality secure infrastructure" — a reference to the US push with allies to keep the Chinese company out of next-generation telecoms networks.

Washington has pressed its allies to shun Huawei in their fifth generation, or 5G, networks on security grounds, but has also suggested it could be a factor in a trade deal with Chinese President Xi Jinping, whom Trump meets on Saturday.

"The trade relations between China and the United States are difficult, they are contributing to the slowdown of the global economy," he told a news conference.

Xi also warned about the protectionist steps he said some developed countries were taking.

"All this is destroying the global trade order... This also impacts common interests of our countries, overshadows the peace and stability worldwide," Xi told a gathering of leaders of the BRICS grouping of nations on the sidelines of the G20 meet.

Modi at the same meeting called for a focus on reforming the World Trade Organisation and Putin decried what he called efforts to destroy the Geneva-based body.

"We consider counter-productive any attempts to destroy WTO or to lower its role," Putin said.

The situation of the global economy was worrying as global trade was feeling the effect of "protectionism (and) politically motivated restrictions," he added.

Trump also flagged trade at the start of his talks with Abe.

"I appreciate the fact that you're sending many automobile companies into Michigan and Ohio and Pennsylvania and North Carolina," referring to US states critical to his effort to win re-election next year.

Trump said the two leaders would also discuss Japanese purchases of US military equipment, although a Japanese official said later the topic did not come up.

Tokyo and Washington are engaged in difficult trade talks as Trump's administration seeks to lower the US trade deficit.

Trump renewed his criticism of the US-Japan security alliance this week as unbalanced.

"We will go in and we will protect them and we will fight with our lives and with our treasure," he said in an interview on Wednesday with Fox television.

"We will fight at all costs, right? But if we’re attacked, Japan doesn’t have to help us at all. They can watch it on a Sony television, the attack."

Under the decades-old US-Japan security treaty, the United States has committed to defending Japan, which renounced the right to wage war after its defeat in World War Two.

Japan in return provides military bases that Washington uses to project power deep into Asia, including the biggest concentration of US Marines outside the United States on Okinawa, and the deployment of an aircraft carrier strike group at the Yokosuka naval base near Tokyo.

After the Trump-Abe talks, a Japanese official told reporters the leaders had agreed to accelerate trade talks and had agreed the alliance was stronger than ever.

Trump, praised German Chancellor Angela Merkel as a "great friend of mine" as well as trade between their two countries.