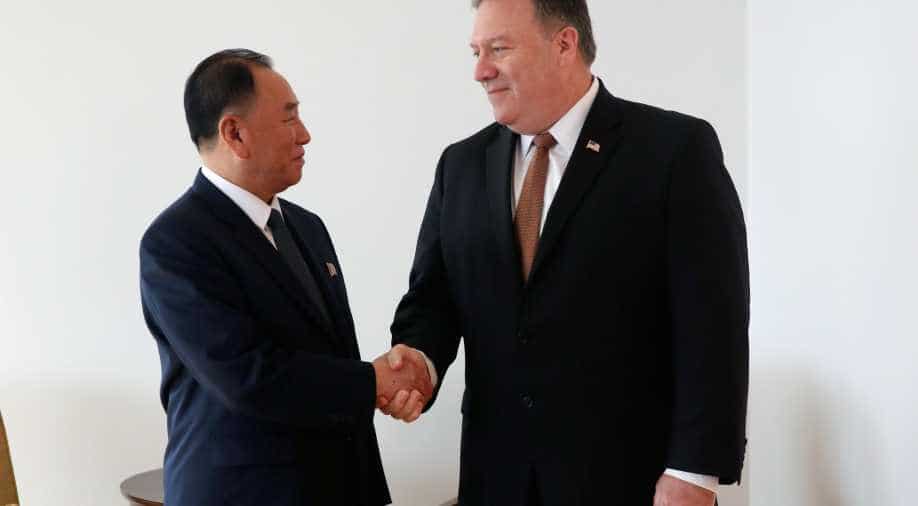 President Donald Trump on Thursday played down the chances of a quick breakthrough in talks with North Korea about its nuclear arsenal, as the top US&nbspdiplomat and a senior official from Pyongyang wrapped up two days of negotiations.

Trump, in a brief interview with Reuters aboard Air Force One on the way to Texas, said he was still hoping to hold an unprecedented summit with North Korean leader Kim Jong Un on June 12 in Singapore.

"I’d like to see it done in one meeting," he said. "But often times that’s not the way deals work. There’s a very good chance that it won’t be done in one meeting or two meetings or three meetings.&nbspBut it’ll get done at some point."

It was not clear if Trump meant he would need a second summit with Kim to reach the U.S. goal of persuading North Korea to abandon its nuclear arms, or if he believed more lower-level talks were needed.

Trump said the North Korean envoy would be coming most likely on Friday to the White House to present him with a letter from Kim Jong Un.

North Korea, whose nuclear ambitions have been a source of world tension for decades, has made advances in missile technology in recent years but Trump has sworn not to allow it to develop nuclear missiles that could hit the United States.

He wants North Korea to "denuclearize," meaning to get rid of its nuclear arms, but the leadership in Pyongyang is believed to regard nuclear weapons as crucial to its survival and has rejected unilaterally disarming.

Trump and Kim traded insults and threats of war last year but in March the bellicose rhetoric gave way to a proposal for a historic summit. However, disputes between Washington and Pyongyang led Trump to announce on May 24 he was cancelling the Singapore meeting with Kim, only to say the following day that it could still happen.

The days since have seen a flurry of diplomatic efforts to get the summit back on track.

If the North Korean delegation goes to the White House, it would be the first visit there by high-level Pyongyang officials since 2000 when senior figure Jo Myong Rok met President Bill Clinton.

Pompeo and Kim Yong Chol met for the second day in New York on Thursday. They shook hands at the start of their latest meeting at a condominium overlooking the East River.

Four officials from both sides sat across each other around a table in a room with a bay window that gave spectacular views of Manhattan, including the U.N. headquarters.

Kim Yong Chol is a close aide of leader Kim Jong Un and is vice chairman of the ruling Workers' Party's Central Committee.

The United States, in return for North Korea giving up its nuclear weapons, could potentially loosen economic sanctions, leading to possible food and other aid to North Korea and improved ties with South Korea.

North and South Korea have technically been at war for decades, even though the Korean War's military combat ended in 1953 because a peace agreement was never signed.

China, North Korea's main trading partner and a key ally, said it supported and encouraged the "emerging good faith" between the United States and North Korea.

"At the same time as working to achieve the goal of denuclearization, we should also build long-term and effective initiatives to keep peace on the Korean peninsula," Chinese Foreign Ministry spokesman Hua Chunying said in Beijing.