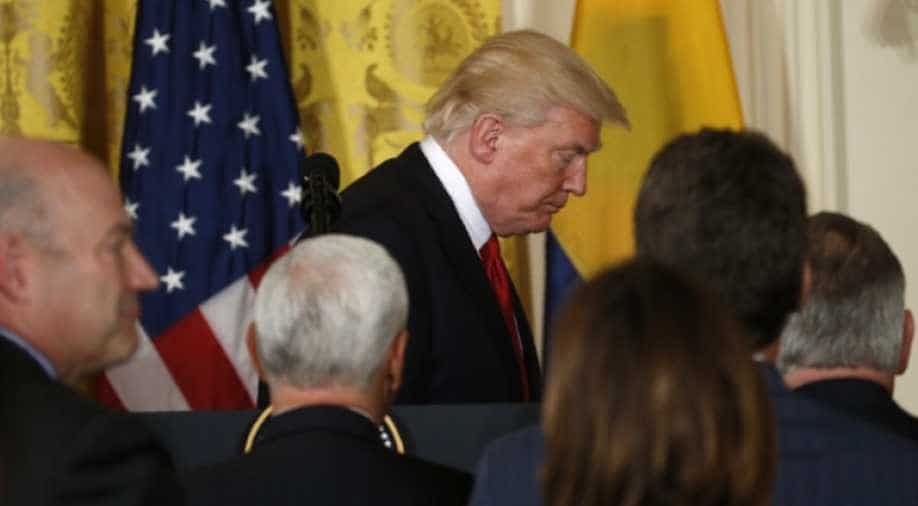 US President Donald Trump Vice President Mike Pence and Secretary of State Rex Tillerson at the conclusion of a joint news conference with Colombian President Juan Manuel Santos at the White House in Washington, US, May 18, 2017. Photograph:( Reuters )

The officials Trump urged were NSA chief Michael Rogers & Director of National Intelligence||Trump had pressed FBI director Comey, who he later fired, to pull back on the investigation||In Feb Trump asked politicians to contact journalists to say there was no evidence linking his campaign with Russia

President Donald Trump asked two top US intelligence officials in March to help push back against the FBI investigation into his campaign's possible links with Russia, The Washington Post reported Monday.

In the newest report suggesting the White House sought to tamp down the Russia probe, the Post said Trump urged National Security Agency chief Michael Rogers and to Director of National Intelligence Dan Coats to publicly deny any evidence of collusion between his campaign and Russia during last year's presidential election.

Citing current and former intelligence officials, the Post said both Rogers and Coats, who was appointed by Trump, did not comply with his request.

The president made the request after then FBI director James Comey revealed that the agency had been investigating Russian interference into the election since July 2016.

Last week, US media reported that Trump had pressed Comey himself in meetings and phone calls to pull back on the investigation. The White House has denied that Trump pressured Comey in any way.

But the FBI director, who Trump fired two weeks ago, wrote detailed memos on his discussions with the president that were cited in the media reports.

In February, Trump asked several senior congressmen and intelligence officials to contact journalists and tell them there was no evidence to support the allegations of campaign links to Russia.

The FBI investigation into potential collusion has 100 agents, and is looking at several angles regarding Trump and Russia.

During the 2016 US election, Trump loyalist and long-time advisor Roger Stone claimed to have "a perfectly legal back channel" with WikiLeaks' Julian Assange, and also had public contact over Twitter with Guccifer 2.0, who American intelligence say is the Russian hacker who hacked into Clinton's emails.

Stone has denied that Assange works for the Russians. Also, there is nothing necessarily illegal about his contact with Guccifer 2.0, but an FBI investigation is ongoing into Stone's actions during the election, as well as other Trump election staff, like Carter Page and Paul Manafort.