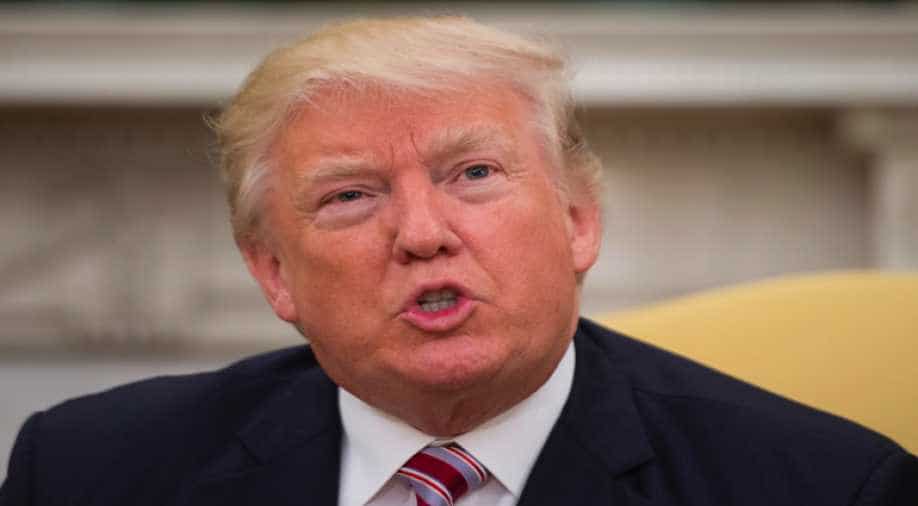 Trump told NBC that had Russia interfered in the 2016 election, it would have been "horrible." Photograph:( AFP )

Donald Trump said Thursday he asked his now-fired FBI director on three occasions whether he was the target of ongoing investigations, stoking allegations of presidential interference.

The US president also acknowledged that Russia was on his mind when he made the decision to sack James Comey, who had been heading a probe into suspected Russian influence in the 2016 election.

"When I decided to just do it, I said to myself, I said you know, this Russia thing with Trump and Russia is a made up story," he said in an interview with NBC, appearing to link Comey's firing with the investigation.

Trump said he had asked Comey if he was the subject of counter-intelligence probes -- twice in conversations over the phone and once over a White House dinner.

"I actually asked him, yes. I said, 'If it's possible would you let me know, am I under investigation?'"

"He said, 'You are not under investigation,'" Trump recounted, repeating an assertion made when the White House announced Comey's firing Tuesday.

Trump's comments to NBC raised questions about whether he had acted inappropriately and whether Comey had broken government guidelines.

US presidents are normally at pains to avoid any suggestion of interference or even commenting on ongoing investigations. The FBI typically does not confirm their existence.

Noted legal scholar Laurence Tribe told AFP that if Comey did indeed answer Trump's question, it would violate Department of Justice rules and "would be unthinkably unethical and unprofessional in this situation."

Trump also said that at the dinner, he and Comey discussed whether the US top cop would stay in his role and continue his ten-year term.

Asking such a question "would come close to bribery... or at least obstruction of justice, which Comey would've had to be an idiot to fall for by offering the assurance sought," Tribe said.

The White House rejected the suggestion the exchange was inappropriate. "I don't see it as a conflict of interest," White House spokeswoman Sarah Huckabee Sanders said.

In the interview, Trump insisted that he always intended to fire Comey, undercutting the initial White House explanation that he acted on the recommendation of top justice officials who criticized the FBI chief's handling of a probe into Hillary Clinton's emails.

"I was going to fire him regardless of recommendations," said the president. "He's a showboat, he's a grandstander."

Opponents have claimed that Comey's shock sacking was a bid to stall an FBI investigation into alleged Russian meddling in the 2016 election, which is also looking into possible collusion between the Kremlin and Trump's team.

Trump's interview was released on the same day the interim head of the FBI told the US Congress that Comey's sacking would not derail the Russia investigation.

"There has been no effort to impede our investigation to date," acting director Andrew McCabe told the Senate Intelligence Committee, in a hearing that capped two days of high drama provoked by the dismissal.

"You cannot stop the men and women of the FBI from doing the right thing," he said. "All of the agents involved in the investigation are still in their positions."

Trump told NBC that had Russia interfered in the 2016 election, it would have been "horrible."

He repeated denials of links between his campaign and Moscow.

"There's no collusion between me, my campaign and the Russians," he said.

While Trump said the outgoing FBI director had left the agency in "turmoil,"  McCabe rejected any suggestion that Comey had lost the support of the rank and file.

"Director Comey enjoyed broad support within the FBI and still does today," he told the committee.

"He was leading an active counterintelligence investigation into any links between the Trump campaign and the Russian government or its representatives, and whether there was any coordination between the campaign and Russia's efforts to interfere in our election."

"For many people, including myself, it is hard to avoid the conclusion that the president's decision to remove Director Comey was related to this investigation."

McCabe gave no information on the status of the FBI probe, which dates back to July last year when the agency became aware of alleged Russian hacking of Democratic party computers and communications.

He also pledged not to discuss the Russia investigation with the White House.

Who is William ruto, the man who could be new president of Kenya?