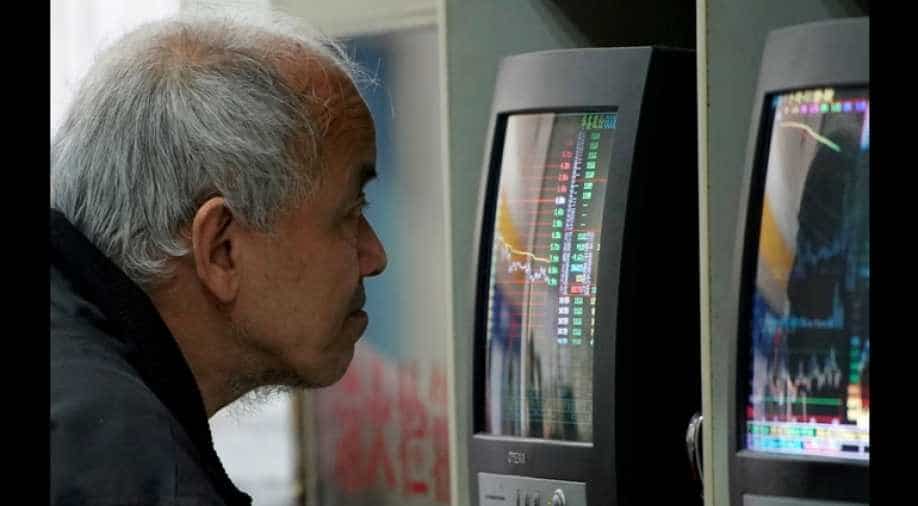 An investor looks at a screen showing stock information at a brokerage house in Shanghai, China. Photograph:( Reuters )

World stocks and emerging markets fell for the fifth straight day on Monday, hammered by fears of a global trade war and the prospect of political instability in Europe after inconclusive elections in Italy.

Assets considered low-risk - including gold, the yen, and German bonds - were in heavy demand, with yields on the latter at the lowest in a month.

"There is nothing in the global set-up that's positive for equities at the moment especially as (share) prices are still out of whack with latest developments," said Salman Ahmed, chief investment strategist at Lombard Odier Investment Managers.

On Sunday, Italian voters delivered a hung parliament, flocking to anti-immigrant and eurosceptic parties in record numbers in a development seen as a setback to stability and wider European integration.

Italian stocks were down 1 per cent at six-month lows, though broader European markets reversed opening losses to trade marginally higher.

Ahmed said developments in Italy represented  "a medium to small shock" with implications for asset prices, while the risk of trade wars was a far bigger issue.

Canada and Mexico have threatened retaliation, and the European Union said it would apply 25 per cent tariffs on about $3.5 billion of US imports if Trump carried out his threat.
China too said it would defend its interests.

"Markets are not priced for trade wars and now you are also seeing a negative reaction to the US moves from Europe and Canada," Ahmed said.

"The major vulnerability is in emerging markets," he added, referring to the developing world`s reliance on trade which has been expanding faster than economic growth in recent years, a key for company profits and equity returns.

Most emerging currencies weakened around 0.3-0.5 per cent to the dollar.
Overshadowing Germany.

Yields on 10-year Italian government bonds jumped 10 basis points at the open, reversing some of the gains they had enjoyed in the run-up to the election. That, in turn, pushed up yields on other lower-rated European bonds from Spain and Portugal.

The prospect of prolonged Italian instability drove the euro to six-month lows versus the yen. Against the dollar, it approached seven-week lows hit last week.

The single currency clawed back some of those losses as the day progressed but Italy continued to overshadow Germany's progress towards a new government - its Social Democrats on Sunday having decisively backed a coalition with Chancellor Angela Merkel`s conservatives.

"Even though Europe is traditionally driven by the French-German axis, Italy is still hugely important," Erik Norland, senior economist at CME Group, said.

"To have (Italy) not in favor of deeper integration, anti-immigrant and moving to a different fiscal line from Germany will limit the upside to the euro in the coming days and weeks."

The dollar too languished near one-week lows against a basket of currencies and was not far off November 2016 lows plumbed versus the yen last week immediately after Trump's trade threats.

Wall Street appeared set for a weak open, with futures down 0.3 per cent.

Gold benefited from the turbulence, rising 0.3 per cent to one-week lows.

While other commodities could suffer should the growth outlook soften, copper prices stayed flat on the day while crude prices rose half a cent before an oil producers' meeting that could discuss limiting output further.