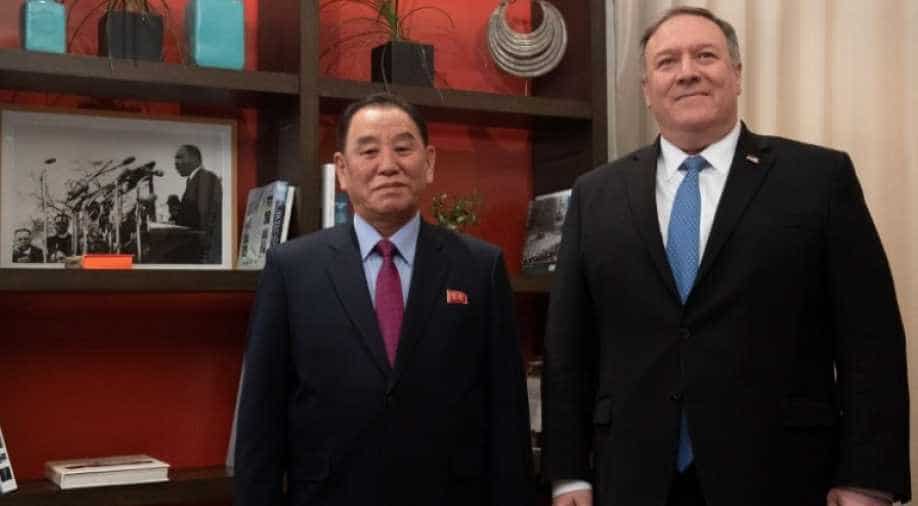 Kim Yong Chol stood formally next to a smiling Secretary of State Mike Pompeo and the US representative on North Korea policy, Stephen Biegun, before a meeting inside a popular hotel in the US capital.

A top North Korean general opened talks with the US leadership Friday on a rare visit to Washington, in a sign of progress towards arranging a new summit with President Donald Trump aimed at denuclearization and easing decades of hostility.

Kim Yong Chol, a right-hand man to leader Kim Jong Un, stood formally next to a smiling Secretary of State Mike Pompeo and the US representative on North Korea policy, Stephen Biegun, before a meeting inside a popular hotel in the US capital.

The trio posed briefly for pictures near a shelf holding a framed photograph of civil rights icon Martin Luther King Jr, little more than a year after Trump was threatening to wipe the totalitarian state off the map.

After tensions eased, the two leaders held their landmark first meeting in Singapore in June, where Kim Jong Un and Trump signed a vaguely worded document with Kim pledging to work towards the "denuclearization of the Korean peninsula". But progress has since stalled as Pyongyang and Washington -- which stations 28,500 troops in South Korea -- disagree over what that means.

Kim Yong Chol is the first North Korean dignitary in nearly two decades known to have spent the night in the US capital. The State Department did not announce the meeting until shortly beforehand, cautious after the general abruptly cancelled his last trip to the United States planned in early November.

Presuming the talks go smoothly, Kim will then head to the White House to meet Trump, a US source said on condition of anonymity.

Trump has repeatedly voiced eagerness to see Kim Jong Un again -- even opining that the two are "in love" after their Singapore summit, the first meeting ever between sitting leaders from the two countries that never formally ended the 1950-53 Korean War.

Tensions began to abate a year ago with the encouragement of South Korea's dovish president, Moon Jae-in. Trump has repeatedly hailed his own diplomacy as a triumph, recently saying there would have been "a nice big fat war in Asia" if it were not for him.

- Vietnam ready to host -
Trump has said to expect an announcement soon about the second summit.

In Vietnam, a government source told AFP that "logistical preparations" were underway to host the summit, most likely in the capital Hanoi or coastal city of Danang, but that no decision had been made.

Prime Minister Nguyen Xuan Phuc said that Vietnam was ready to welcome the two leaders, noting that Hanoi has a growing relationship with the United States despite war memories.

"We don't know the final decision. However, if it happens here we will do our best to facilitate the meeting," he said in an interview with Bloomberg TV.

For Trump, the made-for-television summitry with the young and elusive North Korean leader also offers a welcome respite from a steady barrage of negative headlines at home.

Special Counsel Robert Mueller is probing whether Trump's presidential campaign colluded with Russia, and his insistence that Congress fund a wall on the Mexican border has shuttered the US government for nearly a month.

For Kim, the stakes are more existential as he seeks guarantees of the survival of his regime.

Kim, backed by ally China as well as South Korea, is also hoping for an easing of international sanctions, but the United States insists on maintaining maximum pressure until Pyongyang moves forward on giving up its nuclear weapons.

Although in Singapore Kim promised his "unwavering commitment to complete denuclearization of the Korean peninsula," the United States expects North Korea to give up nuclear weapons assembled over decades of work while Pyongyang more broadly seeks an end to what it sees as US threats.

She noted that Americans have traditionally preferred to hash out the details of agreements before big summits, while the type of leader-driven diplomacy favored by Trump is more common in Asia.

"People have been very sceptical of this top-down approach, but we won't know unless we try it," Town said.