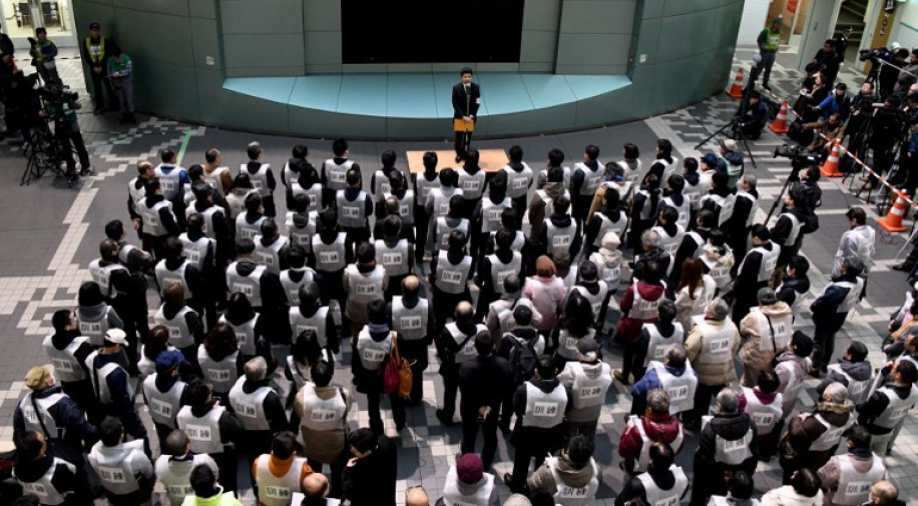 Participants of an evacuation drill, taking part in a simulated emergency in the event of a ballistic missile launch, gather at the end of the drill in Tokyo on January 22. Photograph:( AFP )

A loudspeaker blared out a terrifying warning at the drill, held in a Tokyo amusement park: "We have information that a missile launch has occurred. Please evacuate calmly inside a building or underground."

A few minutes later, a second message was announced via loudspeaker: "The missile passed. The missile likely flew over the Kanto (greater Tokyo) region towards the Pacific Ocean."

People in earthquake-prone Japan are familiar with evacuation drills simulating natural disasters and fires and annual drills are seasonal rituals seen almost everywhere in the country -- from schools and workplaces to care homes.

But a drill simulating a North Korean missile attack on Tokyo is still a novel idea, although similar drills were held in other parts of Japan last year.

"I think it's better than nothing to have such a drill, but I am praying there is no missile attack from the North," Shota Matsushima, 20, a university student who was in a train station near the drill site, told AFP.

Kana Okakuni, 19, also a student, added: "I think it's good to take a precaution, like having drills for earthquakes."

The drill comes as regional tensions remain high over North Korea's nuclear and missile drive, despite the hermit state's plan to send athletes to next months' Winter Games in the South, which has drawn global attention.

North Korea has singled out Japan, a key US ally in the region, for verbal attacks, threatening to "sink" the country into the sea and to turn it into "ashes".

Last year, Pyongyang fired two missiles over Japan and has splashed others into the sea near the country, sparking a mix of panic and outrage.

But many people say that such a system is useless, with too little time to evacuate and few facilities in place to survive a nuclear attack.

There have also been false alarms.

Last week, Japan's public broadcaster NHK mistakenly flashed that North Korea appeared to have launched a missile, warning people to take cover before apologising for the error only minutes later.

That came just days after a false cellphone warning of an incoming ballistic missile terrified residents in Hawaii.

The latest drill in Tokyo attracted some protests.

"I don't want to participate in such a drill and I am against it, as it is a way to promote a war," said Ikie Kamioka, 77, a former primary school teacher who was among dozens of people who rallied in protest against the drill.

"You won't survive if a war occurs. A nuclear war would devastate everything," she said.