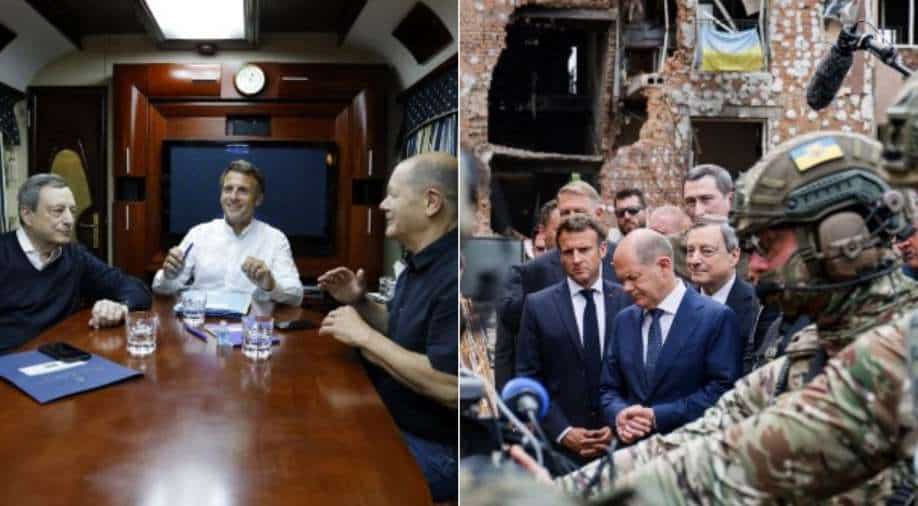 German Chancellor Scholz said that they want to ensure Ukraine gets military, financial and humanitarian aid "for as long as necessary"

French President Emmanuel Macron, German Chancellor Olaf Scholz and Italian Prime Minister Mario Draghi left Poland on Thursday (June 16) on board a train bound for Kyiv. In a show of support, the leaders walked amid the ruined buildings of the Ukrainian town of Irpin. Notably, it is the first time that the leaders of the three European Union countries have visited Kyiv since Russia announced the invasion of Ukraine on February 24.

During the visit to war-damaged Irpin, Macron praised Ukrainian "heroism" against Moscow's invasion. "It's here, among other places, that the Ukrainians stopped the Russian army descending onto Kyiv," the French leader said.

"It represents the heroism of the army, but also of the Ukrainian population. And alongside that, you have traces of barbarism," he further said, adding that Ukraine must "resist and win".

Meanwhile, German Chancellor Scholz said that they want to ensure Ukraine gets military, financial and humanitarian aid "for as long as necessary".

The leaders are due to meet Ukrainian President Volodymyr Zelensky. Amid the crucial visit, the Kyiv government hopes will be followed by concrete action to help it in the war with Russia.

While speaking in the town of Irpin, Macron said that there are signs of war crimes in a Kyiv suburb following "massacres" by Russian forces. The French president also denounced the "barbarism" of the attacks that devastated the town.

The visit is extremely crucial as it comes when EU leaders prepare to make a decision on June 23-24 on Ukraine's request to become a candidate for EU membership.