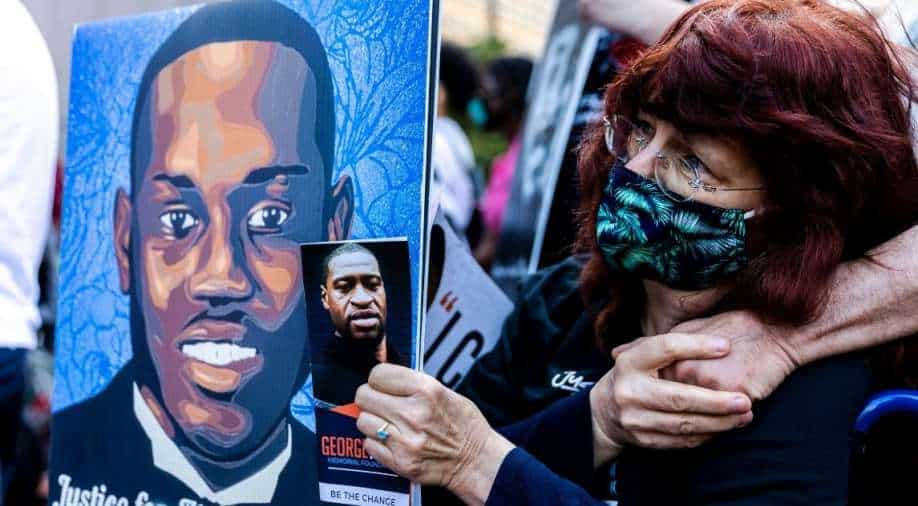 This is a file photo taken on May 23, 2021 as a woman can be seen holding portraits of Ahmaud Arbery and George Floyd. Photograph:( AFP )

Mother of Ahmaud Arbery hailed the sentencing, saying that she never lost faith that justice would be done.

In the United States, three men were sentenced to life in prison on Friday (January 7) for the February 2020 shooting of 25-year-old African-American jogger Ahmaud Arbery, a case that highlighted tensions in the country over racial justice.

A judge in Georgia sentenced them to life in prison, with two having no chance of parole. Under Georgia law murder gets carries a mandatory life sentence unless the death penalty is sought by prosecutors.

The trial was driven by graphic video of the armed men following Arbery as he ran through their neighbourhood, suspecting with no evidence that he might have been a burglar.

The video, taken by Bryan, shows Arbery trying to avoid them and then Travis McMichael eventually confronting and shooting him with a shotgun.

The video was initially kept secret by local law enforcement and it took several months for the McMichaels and Bryan to be arrested, which came after the footage was leaked online, sparking national outrage.

The judge agreed with prosecutors and Arbery's relatives that the three men, who are white, had "assumed the worst" about Arbery, who he said was "hunted down and shot, and he was killed because individuals here in this courtroom took the law into their own hands."

Earlier, Arbery's family told the court they believed that racial stereotyping led to the killing of the avid jogger, who grew up and still lived across the highway from the Satilla Shores neighborhood where he died.

Arbery's mother reacts to the verdict

The mother of Ahmaud Arbery hailed the sentencing, saying that she never lost faith that justice would be done.

"I knew that we would come out with a victory. I never doubted it and I knew that today would come," Wanda Cooper-Jones said at a press conference outside of the courtroom.