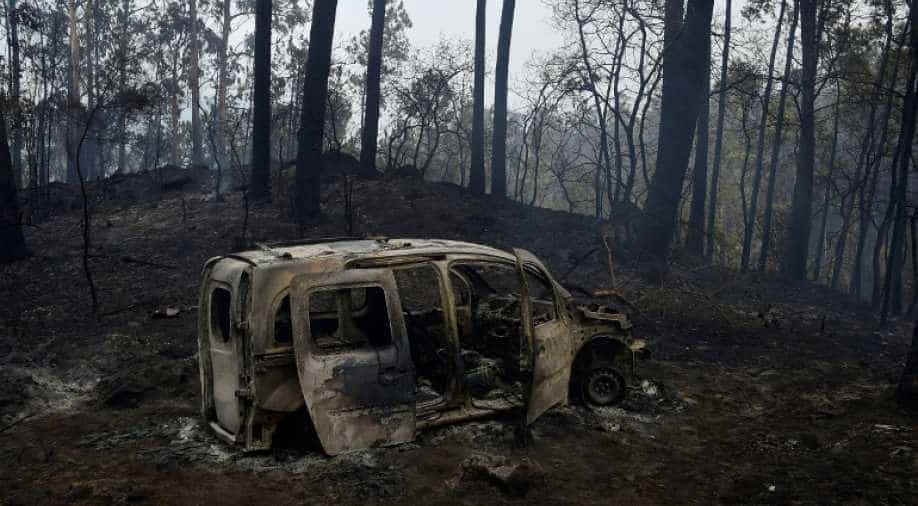 The wreckage of a burned van, two people died trapped by flames is pictured in Chandebrito, near the town of Nigran, northwestern Spain, where blazes sparked by arsonists have been fanned by strong winds from Hurricane Ophelia. Photograph:( AFP )

Fifteen separate wildfires which posed a risk to built-up areas were raging across the region of Galicia, the head of the regional government, Alberto Nunez Feijoo, said.

The flames were being fanned by wind gusts of up to 90 kilometres (55 miles) per hour as Hurricane Ophelia moved north off the coast of Spain towards Ireland, he told private television La Sexta.

"The situation is critical," he said.

Feijoo said "thousands" of firefighters, soldiers and locals were battling the blazes, which were fueled by drought conditions and unusually high temperatures for this time of the year.

"We have not had a situation like this in the past decade. We have never deployed so many means at this time of the year," he said.

Two people died after they became trapped by flames in their van near the town of Nigran as they tried to flee the area, the deputy mayor of Nigran, Raquel Giraldez, told AFP.

An elderly man was found in a shed behind his house in the town of Carballeda de Avia that was engulfed by flames, regional government officials said.

Prime Minister Mariano Rajoy, who is from Galicia, expressed his condolences to the victims in a Twitter message.

Five wildfires were raging near Vigo, Galicia's biggest city, forcing the evacuation of a shopping mall and a PSA Peugeot Citroen factory on the outskirts of the city.

The flames had reached O Castro, a large hilltop park in the heart of Vigo with sweeping views of the city's estuary, Spanish public television TVE reported.

Images broadcast on Spanish TV showed local residents, their mouths and noses covered with handkerchiefs, battling the flames with buckets and pans of water.

Vigo mayor Abel Caballero appealed for calm and urged local residents to shut their windows to keep out the smoke which was engulfing the city.

"We are making a huge effort, the fires near homes are being brought under control, with much help from locals," he told TVE.

The city of around 300,000 residents has opened up two sports centres and booked rooms in three hotels for people who were forced to evacuate their homes.

At least 10 schools cancelled classes on Monday in Vigo because of the flames, local officials said.

Spanish state-owned rail operator Renfe said it had cancelled a train linking Vigo to Barcelona because of the wildfires.

Several roads in Galicia were closed because of the flames, local officials said.

Feijoo said arsonists were to blame for many of the blazes.

"They are absolutely intentional fires, meditated, caused by people who know what they are doing," he told reporters.

The national weather office is forecasting rain and cooler temperatures in Galicia beginning early on Monday which officials hope will help put out the flames.

Meteorologists say Ophelia is the most powerful hurricane recorded so far east in the Atlantic and the first since 1939 to travel so far north.

When it reaches Ireland on Monday it is expected to weaken to a "post-tropical storm", according to the US National Hurricane Center.