On anniversary, thousands gather at Gaza-Israel border in test of truce 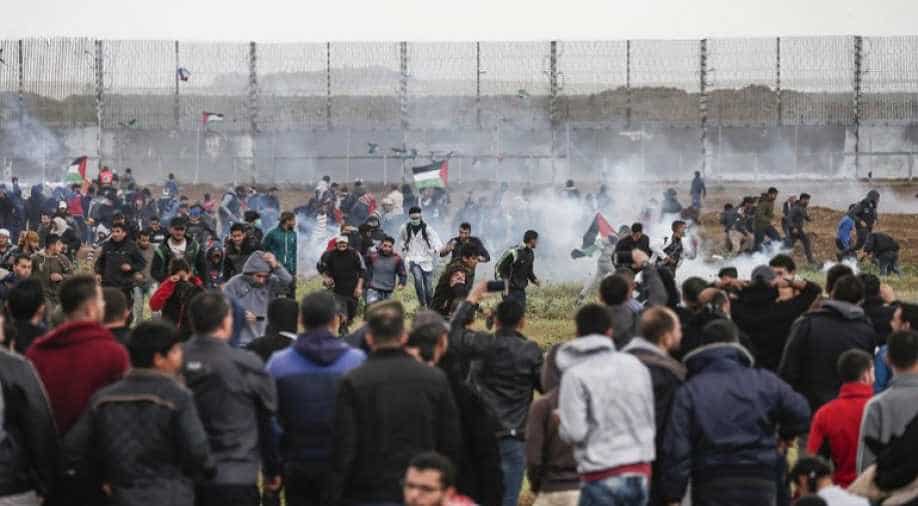 Palestinian protesters flee from tear gas fumes during clashes following a demonstration near the border with Israel in Malaka east of Gaza City on March 30, 2019. Photograph:( Reuters )

Egypt has sought to mediate between Israel and Gaza's Islamist rulers Hamas to rein in violence and avoid the sort of deadly response from the Israeli army that has accompanied past protests.

Thousands of Gazans began gathering to mark the first anniversary of mass protests along the Israeli border on Saturday, testing a fragile truce only 10 days ahead of an Israeli general election.

Egypt has sought to mediate between Israel and Gaza's Islamist rulers Hamas to rein in violence and avoid the sort of deadly response from the Israeli army that has accompanied past protests.

But warnings to stay far back from the heavily fortified fence that marks the border were already not being heeded by some.

"We will move towards the borders even if we die," said Yusef Ziyada, 21, his face painted in the colours of the Palestinian flag.

"We are not leaving. We are returning to our land."

Dozens of Palestinians were seen approaching the border fence east of Jabalia in the northern Gaza Strip at around midday (0900 GMT) before retreating as Israeli troops fired tear gas.

The protesters threw stones at the Israeli soldiers and burnt tyres.

The city's mosques were using loudspeakers to call on people to attend, but rainy weather could affect turnout.

"There are about 5,500 rioters gathered at several locations along the fence," the Israeli army said at around 1 pm (1000 GMT).

"Some of them are throwing stones and setting tyres on fire," it said, adding soldiers were responding with "riot dispersal means."

Before dawn Saturday, a Palestinian was killed by Israeli fire during an overnight protest ahead of the main demonstration, the enclave's health ministry said.

Israel's army had not commented on the death, but late Friday said explosive devices were thrown at the fence "throughout the evening."

A tank "struck a Hamas military post in the northern Gaza Strip" in response, it said.

Protesters were marking the first anniversary of often violent weekly demonstrations in which around 200 Palestinians and an Israeli soldier have been killed.

The anniversary comes only days after another severe flare-up of violence between Israel and Hamas. An Egyptian-brokered ceasefire restored calm.

The timing is especially sensitive for Israel, which holds a keenly contested general election on April 9 in which Prime Minister Benjamin Netanyahu faces a stiff challenge from centrist former military chief Benny Gantz.

He is widely seen as wanting to avoid a major escalation, but has at the same time faced political pressure over accusations of being soft on Hamas.

The protests peaked on May 14, when Israeli forces shot dead at least 62 Palestinians in clashes on the same day Washington moved its embassy to Israel to the disputed city of Jerusalem.

The demonstrators are calling for Palestinians to be allowed to return to land their families fled or were expelled from during the 1948 war that accompanied Israel's creation.

Israel says any such mass return would spell the end of a Jewish state and that its actions have been necessary to defend the border.

It accuses Hamas of orchestrating violence, but its soldiers' use of live fire has come under heavy criticism.

Last month, a UN probe said Israeli soldiers had intentionally fired on civilians in what could constitute war crimes.

Analysts highlight desperate living conditions and lack of freedom of movement as driving forces behind the protests.

Israel, which has fought three wars with Hamas, has blockaded the enclave for more than a decade, and Egypt often closes Gaza's only other gateway to the outside world.

The UN says more than 90 per cent of the water is unsafe for drinking and residents receive less than 12 hours of mains electricity a day.

Many protesters have remained far back from the fence and have demonstrated peacefully, but others have approached in numbers and clashed with soldiers.

Small groups have attached incendiary devices to balloons to float them over the border in an attempt to set fire to nearby Israeli homes and farmland.

The Israeli army has increased its presence along the border in recent days deploying several thousand troops, including dozens of snipers.

Hugh Lovatt, Israel-Palestine analyst at the European Council of Foreign Relations, said Hamas was trying to use the protests to get concessions from Israel.

"Hamas seems to think that the run-up to Israeli elections, and Netanyahu's desire to maintain calm in Gaza, has given it increased leverage," he said.

"But as we have seen with Israel's military build-up along the Gaza border, this could be a risky strategy."