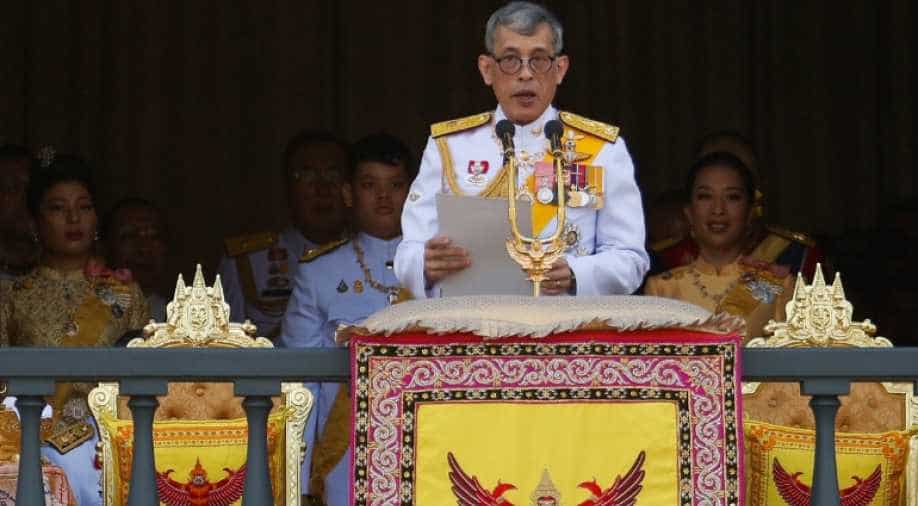 'I want the unity shown here with this goodwill to be an encouraging sign for everybody, all sides to perform their duties for the prosperity of our country,' Maha Vajiralongkorn said.

Thailand's newly-crowned King Maha Vajiralongkorn praised a show of "unity" at his first public address on the final day of an elaborate coronation Monday, speaking to a sea of supporters and witnessed by the head of the junta that has led the divided country since a 2014 coup.

Walking onto a wooden balcony to the roar of the crowd, Vajiralongkorn said he was "truly happy" with the display.

"I want the unity shown here with this goodwill to be an encouraging sign for everybody, all sides to perform their duties for the prosperity of our country," he said.

Before the remarks, junta chief Prayut Chan-O-Cha addressed the king from the ground, pledging "loyalty to his majesty and the great Chakri dynasty with our lives".

Vajiralongkorn was accompanied by Thailand's new Queen Suthida, whom he married in a formal ceremony days before the coronation.

The 66-year-old is the 10th king in the Chakri dynasty and ascended the throne in late 2016 after the death of his beloved father Bhumibol Adulyadej.

Not as well known, Vajiralongkorn spends a great deal of time in Germany and has been divorced three times.

The monarchy is shielded by some of the world's harshest lese majeste laws, making any critical discussion about the king all but impossible.

But wall-to-wall coverage and social media posts of the ceremony provided rare glimpses into the private lives of the ultra-guarded royal family.

After Monday's address, the king's fashion designer daughter Princess Sirivannavari was seen capturing the moment on a smartphone and waving to the crowd.

Over the weekend she took to Facebook to post personal shots of her and her family members, garnering more than 120,000 shares.

The king's eldest sister Princess Ubolratana has long used Instagram as a way to communicate with fans.

She drew headlines in February when she tried to stand for prime minister with an anti-junta party. The king thwarted the bid with a royal command and the party was later dissolved.

Though she was seen hugging the king at the ceremony, she was asked in the comments section of a photo she posted Saturday why she did not receive a royal title during the event.

"Because my work is in this style," she said. "It's more convenient and effective this way."

The three-day coronation -- the first one in 69 years -- cemented Vajiralongkorn's position at the top of one of the world's richest monarchies.

He was crowned with the 7.3-kilogram Great Crown of Victory Saturday after sacred purification rites.

On Sunday, the king was carried through Bangkok's historic old quarter on a gilded palanquin flanked by royal guards in a colourful seven-hour procession.

The royal ceremonies were wedged between a disputed election in March and the expected announcement of poll results later this week.

The arch-royalist junta that seized power in 2014 in a coup has claimed the popular vote, but a coalition of "pro-democracy" parties say they have a lower house majority.