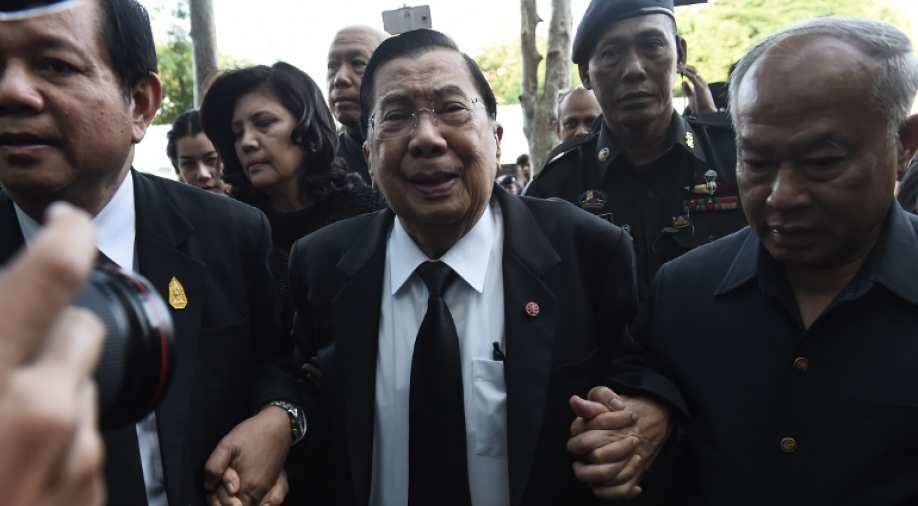 Somchai and Chavalit both hail from the political faction loyal to Thaksin Shinawatra, the self-exiled billionaire tycoon at the heart of Thailand's festering political divide

Former premier Somchai Wongsawat and his then-deputy Chavalit Yongchaiyudh faced negligence charges over a police operation to remove protesters who had laid siege to parliament.

The deadly incident was one of many violent flare-ups over the past decade between their political camp, a populist movement led by former premier Thaksin Shinawatra, and a conservative Bangkok-based establishment.

Police fought pitched battles with demonstrators, some of whom possessed homemade bombs, and fired multiple rounds of tear gas. Two died and hundreds were wounded.

After the military seized power in 2014, authorities put the four men on trial.

But in its ruling on Wednesday nine judges dismissed the case, arguing that authorities had a responsibility to clear the protesters because they had not remained peaceful and that none of the defendants bore direct responsibility for the deaths.

"The protesters surrounded parliament and threatened to storm the building, therefore it was not a peaceful rally. The authorities had to use force in order to clear the way," the court said in its published summary.

"The court has dismissed the case," it added.

Somchai and Chavalit both hail from the political faction loyal to Thaksin Shinawatra, the self-exiled billionaire tycoon at the heart of Thailand's festering political divide.

Somchai, Thaksin's brother-in-law, was prime minister at the time of the crackdown while Chavalit had served as premier in the 1990s.

Thaksin was ousted by the army in 2006, setting off a decade of instability marked by frequent bouts of political violence, short-lived governments and another army putsch in 2014.

Parties run by or allied to Thaksin's clan have won every election since 2001, largely through the support of rural and poor voters from the populous north who adore them.

But they are loathed by much of Bangkok's royalist elite and their military allies who have used street protests, the courts and coups to crush their opponents.

During the 2008 protests it was the anti-Shinawatra faction -- dubbed the "Yellow Shirts" -- who were laying siege to parliament.

Later that year the Yellow Shirts famously occupied Bangkok's Suvarnabhumi Airport to try to topple the government, an action that led to the stranding of tens of thousands of holidaymakers in the kingdom.

A small group of Yellow Shirt supporters shouted "Murderers!" as the four left court after their acquittal.

Tee Sae Tiew, a 73-year-old who lost his leg after he was struck by a tear gas round in 2008, said he had hoped "to see wrongdoers punished for what they did".

Outside the court Somchai waved to his own supporters. "I am glad we received justice from this fight," he told reporters.

Two years after the 2008 protests the tables had turned.

The Yellow Shirt faction was in power and it was the Shinawatras' "Red Shirt" allies who were now blockading swathes of Bangkok -- resulting in an army crackdown that killed more than 90.

No one has been prosecuted for those deaths.

Some of the senior officers behind that 2010 crackdown later led the 2014 coup that brought the current junta to power.