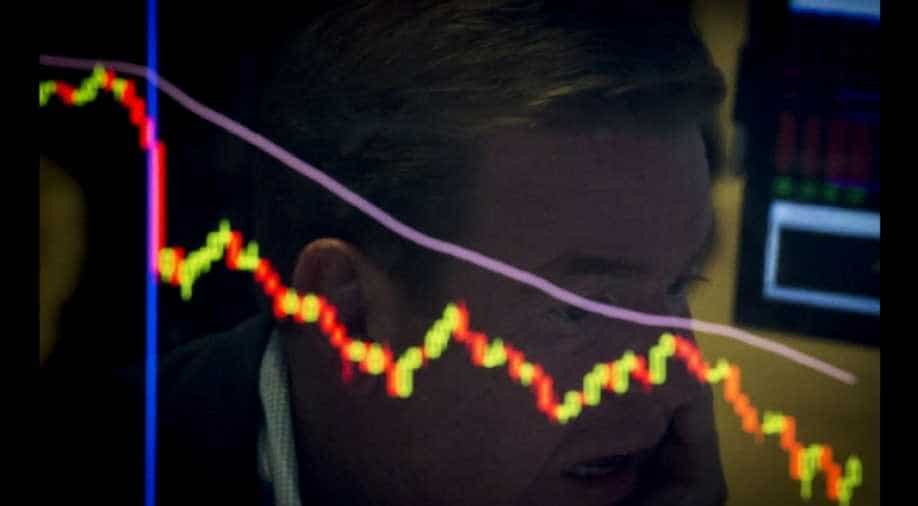 A specialist trader is reflected in a screen at his post on the floor of the New York Stock Exchange. Photograph:( Reuters )

World stocks rose on Friday, lifted by strong share price gains for tech giants such as Amazon and Facebook and growing hopes of a lasting peace on the Korean peninsula after a ground-breaking meeting of North and South Korean leaders.

European shares were set to end the week with a flourish too with a pan-European index set to post its fifth week of gains in a row, with the tech sector outperforming.

The latest gains are being partly spurred by forecast-beating first-quarter earnings from two of the so-called FANG tech stocks -- some of the world's largest and most influential companies by market capitalisation -- which has boosted sentiment on the technology sector worldwide.

Amazon.com Inc shares jumped more than 6 per cent in after-market trading while Facebook surged 9.1 per cent on Thursday, calming worries about the fallout from its use of consumer data.

"Macroeconomic data has been soft in a number of key economies, so it is reassuring that amidst those concerns we are still seeing strong earnings numbers coming through from big ticket corporates such as Amazon and Facebook," said Investec economist Victoria Clarke.

"This is a good gauge of the broad drivers of sentiment particularly when there are those concerns about demand holding up in the face of weak economic data," Clarke added.

European tech shares rose 1 per cent to the highest in more than five weeks, buoyed also by gains in local IT and chipmaking firms such as Capgemini, ASML and Infineon.

Sterling slumped to its lowest since March 9 against the dollar after data showed Britain's economy slowed much more sharply than expected in the first quarter of 2018, slashing market expectations of a Bank of England rate hike in May.

"A May rate hike is off the table now this pushes the hike back to August at the earliest and more likely November," said Jake Trask, a currencies analyst at OFX.

However, sterling's slide helped shares on Britain's FTSE index to rise 0.7 per cent with gains led by multi-national earners which earn a big chunk of their revenues overseas but report profits in pounds.

The weak data adds to concerns that economic growth across the developed world is running out of steam, especially after lacklustre euro zone figures earlier in the week and data on Friday showing French economic growth slowed more than expected in the first quarter.

The European Central Bank on Thursday played down concerns over softness in the euro zone economy as it sought to bolster expectations for a gradual withdrawal of monetary stimulus.

On Friday, Japan's central bank kept policy unchanged but ditched a time frame it had set for hitting its inflation target, in a surprise move analysts say is aimed at keeping market expectations for more stimulus in check.

"Within a 12 hour period it seems like the expectations are three key central banks will delay any tightening of monetary policy from what was previously expected... Equity markets should be comforted by that," said Bob Michele, CIO and head of global fixed income, currency and commodities at JPMorgan Asset Management.

North and South Korea agreed on Friday to pursue the "complete denuclearisation of the Korean peninsula" and work towards declaring an official end this year to the 1950s Korean war.

The won rose as much as 0.6 per cent against the dollar, while Asian stock markets also revelled in the glow of the summit between North and South Korea.

Seoul shares briefly rise more than 1 per cent to a one-month high, while MSCI's index of Asian shares outside Japan rallied 0.8 per cent and Japan's Nikkei share average rose 0.7 percent to two-month peaks.

The dollar meanwhile hit its highest since Jan. 12 against a basket of currencies, having benefited from the recent run in US&nbspTreasury yields -- 10-year yields hit 3 per cent this week for the first time since January 2014.

With a weekly gain of more than 1.5 per cent, the greenback is set for its best weekly performance since late 2016.