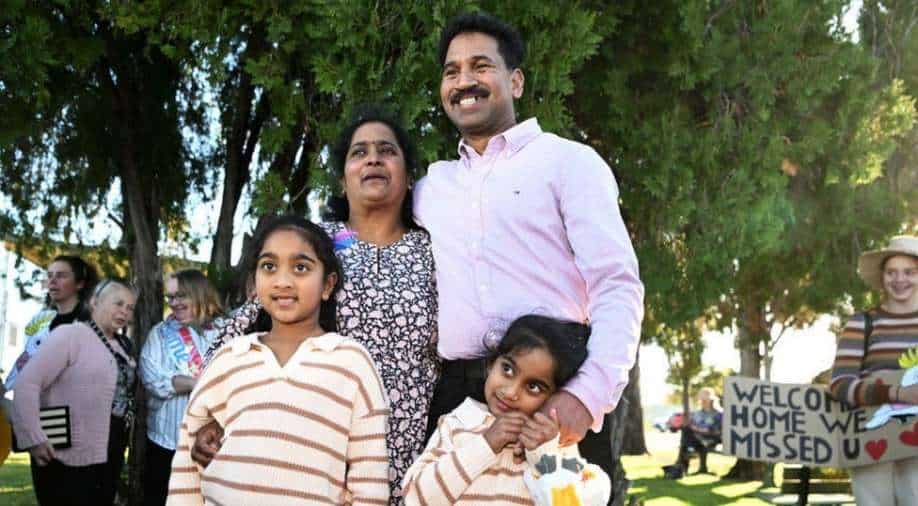 Nadesalingam family all smiles after the news Photograph:( Getty )

A long, arduous four-year legal battle has come to an end for the Nadesalingam family in Australia. Reportedly, the family has been granted permanent residency, ending a community-wide campaign that protested against their deportation. Andrew Giles, the federal immigration minister became their guardian angel by intervening and ensuring that the family received their visas.

"This government made a commitment before the election that, if elected, we would allow the family to return to Biloela and resolve the family's immigration status," said Giles.

Meanwhile, Priya Nadaraja, elated at the decision remarked, "Now I know my daughters will get to grow up safely in Australia. Now my husband and I can live without fear."

Priya Nadaraja, Nades Murugappan and their daughters Kopika and Tharnicaa had been living in an immigration detention centre after Priya's visa expired, back in 2018. The couple's request for being included in the mainstream with the 'refugee' status was turned down by the government, repeatedly.

It is pertinent to note that Priya and her husband arrived in the down under country after fleeing Sri Lanka on refugee boats. This was nearly a decade ago. The couple soon met each other, got married and had two kids.

But soon trouble came their way as the Australian government detained them, citing they did not have any legal rights to stay in Australia. First transferred to an immigration detention centre in Melbourne, the family was later shifted to a detention centre on Christmas Island, where they spent the majority of the last two years, fighting courtroom immigration battles.

However, after the government changed and labour Prime Minister Anthony Albanese and his administration came to power, good news came for the Nadesalingam family.

In June, the family was granted a bridging visa and allowed in Biloela, a town in Queensland, from where they were detained four years back by the border force agents in a 5 AM raid.

Illegal immigrants will be turned away: Andrew Giles

The Nadesalingam family has now become the face of fighting Australia's tough asylum-seeking policies. However, Giles made it clear it might have been a one-off case as those entering Australia illegally through unauthorised vessels will be turned away.

"For anyone who attempts to migrate via an unauthorised boat to Australia – you will be caught, returned or sent to a regional processing country. "This has not changed since the last government. We are not considering changing this policy." said Giles.