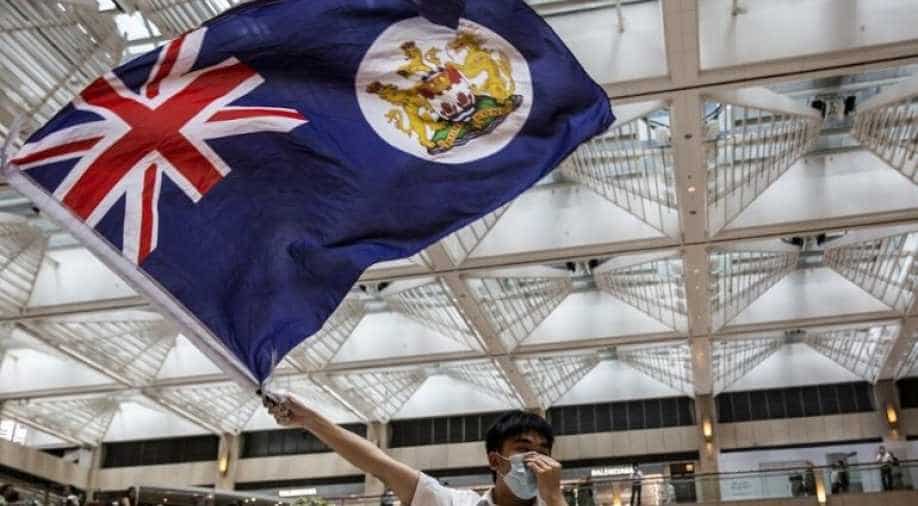 A pro-democracy protester waves a British colonial flag during a "Lunch With You" rally in a shopping mall in the Central district in Hong Kong on June 1, 2020 Photograph:( AFP )

The security legislation imposed on Hong Kong sets the stage for the most radical changes to the former British colony's way of life since it returned to Chinese rule 23 years ago.

Taiwan on Tuesday warned its citizens of risk in visiting Hong Kong after China's parliament passed national security legislation for the city while Taiwan's president said she was disappointed about the law.

The security legislation imposed on Hong Kong sets the stage for the most radical changes to the former British colony's way of life since it returned to Chinese rule 23 years ago.

The new law would "severely impact" freedom, democracy and human rights in Hong Kong, Taiwan's cabinet said in a statement, adding that the democratic island would continue to offer help to Hong Kong people.

"The move severely impacts Hong Kong society's freedom, human rights and stability. The government strongly condemns it and reiterates its support for the people of Hong Kong as they strive for democracy and freedom," cabinet spokesman Evian Ting said.

Authorities in Beijing and Hong Kong have repeatedly said the legislation is aimed at a few "troublemakers" in Hong Kong and will not affect rights and freedoms, nor investor interests.

Nevertheless, Ting warned Taiwanese of "possible risks" when visiting Hong Kong in light of the legislation. He did not elaborate.

Months of anti-government, pro-democracy protests in Hong Kong last year won widespread sympathy in democratic and Chinese-claimed Taiwan, which has welcomed people from Hong Kong who have moved to the island and expects more to come.

President Tsai Ing-wen, who in May became the first government leader anywhere to pledge measures to help Hong Kong people who leave due to what they see as tightening Chinese controls, said she was "very disappointed" by China's imposition of the law.

"We hope Hong Kong people continue to adhere to the freedom, democracy and human rights that they cherish," she told reporters.

Taiwan is set to launch on Wednesday a dedicated office to help those thinking of fleeing Hong Kong. July 1 is also the anniversary of day the city returned to Chinese rule from Britain in 1997 with the promise of wide-ranging freedoms under a "one country, two systems" formula.

Tsai said the legislation proved that the formula "was not feasible" and that Taiwan would provide "concrete" humanitarian assistance to migrants from Hong Kong.