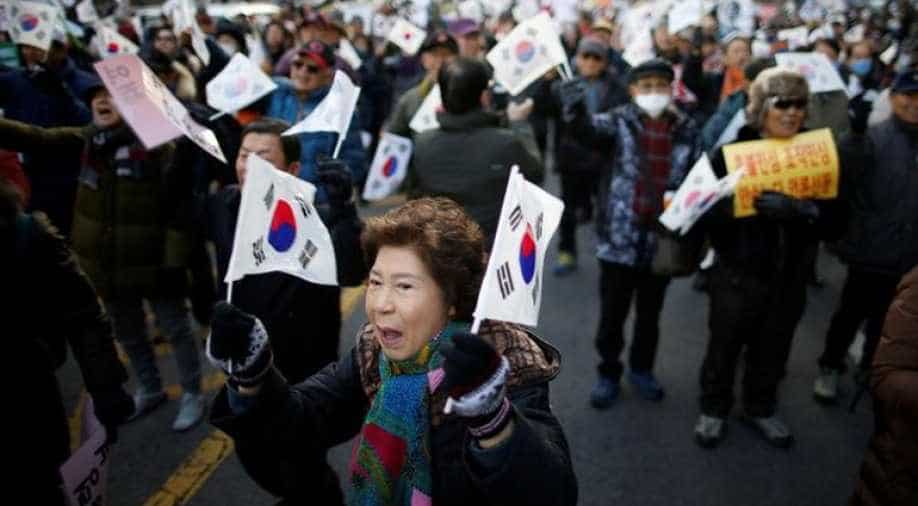 Supporters of South Korean President Park Geun-hye rallied on Saturday for her reinstatement while opponents gathered to repeat their demands that the leader impeached over a corruption scandal step down immediately.

The Park supporters, who last held a major rally in mid-November, began their demonstration first. Later, anti-Park protesters packed the streets of central Seoul for an eighth straight weekend.

Many of the opponents were angry that Park's lawyers argued on Friday that the impeachment had no legal basis.

"This is my first time out here, but yesterday when I heard about her opinion against the impeachment submitted to the Constitutional Court, whatever pity I had felt for her disappeared," Roh Yi-young, 55, said.

Park's lawyers struck a defiant note in their first comments since the impeachment vote, saying the motion should be overturned by the Constitutional Court, which has 180 days to review it.

The lawyers' submission to the court rejected all the points made in the impeachment motion approved by a wide margin by parliament on December 9 which accused her of violating her constitutional duty and breaking the law.

Park's presidential powers have been suspended since the vote for impeachment, which set the stage for her to become South Korea's first elected leader to be thrown out of office. The Constitutional Court must first uphold the motion.

Park, 64, is accused of colluding with long-time friend Choi Soon-sil, who has been indicted and is in custody, to pressure big businesses to make contributions to non-profit foundations backing presidential initiatives.

Saturday's pro-Park rally near the court a few blocks from the presidential Blue House drew largely older people who said those behind the movement to oust her were misguided.

"The people who love this country have come out to save the country despite the hardship," Kim Ku-ja, 69, said with the national flag draped over her.

She blamed the media for fuelling anti-Park sentiment, focusing their coverage too much on the views of younger and liberal voters and on criticism that Park received cosmetic procedures while in office.

"What's so wrong about a woman getting Botox shots? Why is that a problem?" Kim said.

Park's supporters have been in the minority in the weeks of protests demanding her removal.

Organisers of Saturday's anti-Park rally estimated the crowd at about 300,000. It was largely peaceful as were the previously rallies, with songs and speeches striking a festive tone mixed with angry calls for her to quit.

Park has indicated she would not step down, fuelling concern that the political crisis could drag on for months. She has denied wrongdoing but apologised for carelessness in her ties with Choi.

If the impeachment is upheld or Park steps down voluntarily, a new election has to be held in 60 days to pick a new leader who will serve a single five-year term. Park's term was originally set to end in February 2018.