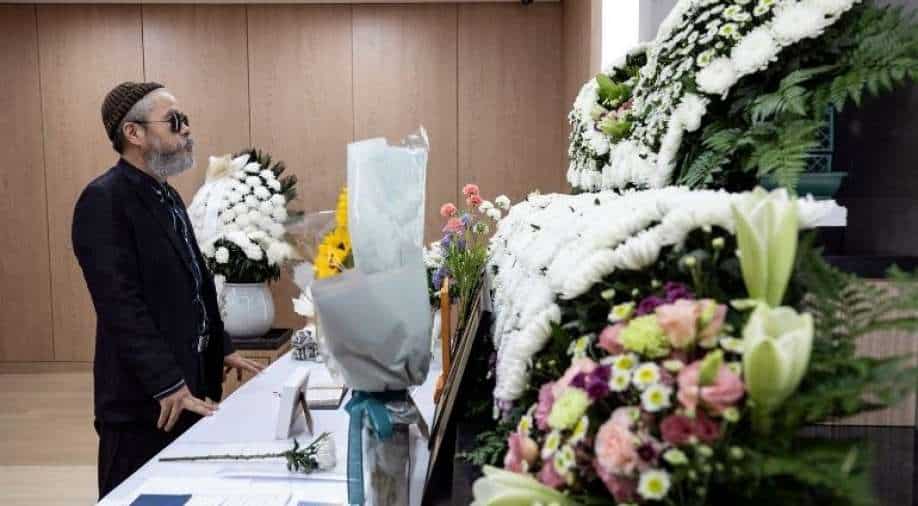 The father of Master Sgt Lee Ye-ram, who died by suicide in May after being sexually assaulted, at a mourning altar in a military hospital near Seoul, South Korea (file photo).(Pic Credit: Jean Chung/The New York Times) Photograph:( The New York Times )

Sexual assault seems to have become common in South Korean armed forces. Around four female victims have taken their own lives in the past eight years in the military. This happens even as the country tries to recruit more women amid a shortage of male conscripts

​The soldiers were driving back to the South Korean air force base after dinner and drinks on March 2. In the back seat, Master Sgt. Lee Ye-ram could be heard repeatedly begging her male colleague​, Master Sgt. Chang Dong-hoon, to stop sexually assaulting her.

“Can you please stop ​it,” she said, according to the conversation recorded by the car’s dashboard camera. What came after was the latest example of South Korea’s persistent struggle to rid its military of sex crimes​, even as the country tries to recruit more women amid a shortage of male conscripts.

When Lee reported that Chang kissed and groped her in the car that night, her superiors tried to bury the complaint, according to Defense Ministry investigators. The ​military did not bring formal charges against Chang until after Lee, 23, took her own life on May 21. Chang has since admitted to the assault and is facing trial.

It has become what some say is a pattern​ in South Korea​: One female​​ ​soldier after another has taken ​her own life ​in recent years after they reported being sexually assaulted in the military. Hundreds of sexual assaults are reported every year. At least four female victims have taken their own lives in the past eight years, including a ​navy ​chief petty officer who was found dead in her ​apartment in August.

The deaths have forced South Korea’s military to accept some long-delayed reforms. In August, the public uproar incited by Lee’s suicide prompted the National Assembly to revise a law stipulating that all sex crimes be investigated by the national police and tried in civilian courts as opposed to courts-martial. The move was meant to increase transparency and protect victims, but victims and their families say it is the military itself that needs to change.

“The moment a victim reports the assault, her entire unit goes to work to persuade and coerce her to bury the problem,” said Kim Jong-dae, a former lawmaker who sat on a civilian-military panel created to recommend solutions to the assaults. “The victim takes suicide as the only exit out of such a situation.” The panel recommended this week that the armed forces prepare detailed guidelines on how to protect victims of sexual violence.

So far, 15 people have been indicted in connection with Lee’s case, none of them high-ranking air force police officers or prosecutors accused of delaying the initial investigation. Her family has refused to bury her until the officials are punished, but Defense Ministry investigators have said there is not enough evidence. They wrapped up their work last week.

South Korean society has long understood the need to address widespread gender bias, but women in the armed forces are seen as particularly vulnerable. The country’s 550,000-member military is considered one of its most hierarchical, male-dominant and paternalistic institutions, and former soldiers say women are treated as playthings rather than colleagues.

The issue attracted national attention in 2013 when an army captain died by suicide after being abused by her boss. “I don’t want to die” were among her last words, said Kang Suk-min, the family’s former lawyer. After the captain’s death, her father said he hoped that South Korea would “never again have to see another female soldier die like my daughter.”

The day after her assault, two of Lee’s immediate bosses — an air force senior master sergeant and a warrant officer — discouraged her from taking her case to the military police, and one of the men suggested she act “as if nothing had happened,” according to the investigation. Lee eventually asked to be transferred to another unit, where she said she was treated as a troublemaker.

“I am not sure I can hold on,” she told her father in a desperate voice message on May 7.

The military has since arrested both bosses on charges of trying to coerce Lee into silence. The air force senior master sergeant died by suicide in July while in military custody. The warrant officer has denied all charges against him. Gen. Lee Seong-yong, the air force’s chief of staff, has stepped down.

More than 400 cases of sexual assault between soldiers have been reported annually from 2017 to 2020 in South Korea, according to data submitted to Kwon In-sook, a female lawmaker. Less than 40% of the accused have faced charges, and nearly 43% of those charged walked free after receiving suspended prison sentences.

Sexual assault victims and sexual minorities are often the ones who fear punishment. Gay soldiers have been indicted on a charge of sodomy, a crime under the military’s criminal code. A transgender woman who was expelled after gender-reassignment surgery died by suicide in March. (Last week, a local court ruled that her dismissal was illegal.) Yet as the military cracks down on sexual minorities, critics say, the sexual assaults continue.

“Most of the sexual violence in the military goes unreported,” said Lim Tae-hoon, head of the Center for Military Human Rights, a civic group in Seoul that has assisted victims of sexual violence. “You protest and ruin your chance for promotion or you leave the military.”

In a survey conducted by the Defense Ministry in 2019, fewer than one-third of those who said they had experienced sexual assault reported it to the authorities, mainly because they felt “nothing would happen.” The Defense Ministry has said that it was working to change military culture and adopt new policies to help fight sexual assaults, but former soldiers say male superiors are more concerned about damage control than accountability.

Much of the sexual harassment takes place off base during group dinners and drinking parties, according to investigators and former soldiers. In 2014, an army division commander stepped down after it was revealed that he had coerced female soldiers into joining drinking parties at his residence.

“They want their female subordinates to be there to act as ‘flowers,’ serving drinks,” said Bang Hye-rin, who was a Marine captain until 2017 and is now a counselor for victims of sexual assault at the Center for Military Human Rights. “Even if you feel disgusted to do so, you swallow your pride and do it because they have the power to affect your promotion.”

Women in the military are treated as “second-class, nonessential members of the armed forces” by their male colleagues and superiors, Bang said. “They don’t consider sexual harassment a serious crime, treating it like some social gaffe that can happen when men and women drink together.”

In a petition to parliament last year, an air force captain wrote bitterly about a colonel who pressured her to attend a party in 2019. She was sexually assaulted by one of his friends. “We have been promised a South Korea where women are respected and guaranteed equal opportunities and do not end their own lives out of disappointment and frustration,” she wrote. “Being summoned to a drinking party and serving as a sexual plaything is not part of serving the country as an air force captain, is it?”

Lee’s father remembered his daughter as a vivacious and caring woman. She wanted to enlist in the air force early on, joining a handful of girls who were accepted into a high school program run by the air force to train young cadets. She began her service in 2017 and thrived until the sexual assault left her dependent on sleeping pills, according to her father.

“My daughter chose to die rather than succumb to their coercion,” he said, looking at her photos in a mourning altar set up in a military hospital near Seoul. “She defended her principle through death.”

The initial internal report on Lee’s suicide identified her as a sexual assault victim and quoted her parents as saying that she was under duress from superiors demanding that she not press charges against Chang. But those findings were expunged from the report before it was delivered to the Defense Ministry two days after her death. Two air force colonels have been indicted on charges of falsifying the report to keep Lee’s suicide quiet.

It was not until May 31 — the day a local broadcaster broke the news about Lee’s death — that military prosecutors questioned Chang for the first time. In its investigation, the Defense Ministry found that Lee had ​also ​been sexually abused by two other superiors during her time in the air force.

Chang apologized to Lee’s family ​during a trial that began in August. Prosecutors have asked the court to sentence him to 15 years in prison. At a recent hearing, Lee’s father lunged toward Chang in a rage. He hurled curses and a water bottle before the soldier was whisked away by the military police.