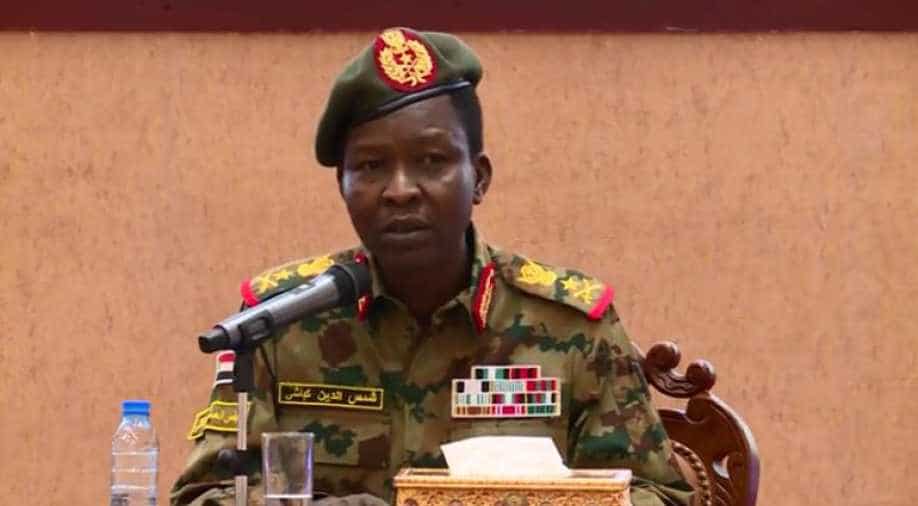 Two different groups of people suspected of involvement in the attempted coups had been arrested, the Transitional Military Council`s spokesman said. One group consisted of five individuals while the other had more than 12 members, he said.

Sudan's military rulers said on Thursday they had thwarted several coup attempts and that some officers had been arrested over the deadly dispersal of protesters at a sit-in in Khartoum earlier this month.

Two different groups of people suspected of involvement in the attempted coups had been arrested, the Transitional Military Council`s spokesman said. One group consisted of five individuals while the other had more than 12 members, he said.

The council itself took power in a coup on April 11 when military officials ousted and detained former President Omar al-Bashir after months of protests against his 30-year autocratic rule.

An area outside the defence ministry in Khartoum became the focal point of fresh protests as demonstrators demanded that the military hand over power to civilians.

Stalled talks between the council and an alliance of opposition groups over who should control a transition towards elections then collapsed after security forces crushed the protest sit-in on June 3.

Opposition-linked medics have said 118 people were killed in the crackdown while the military council has put the toll at 61.

The council said Thursday that some officers had been arrested in connection with the crackdown. It did not elaborate, but the results of an investigation into the matter would be announced on Saturday, said Shams El Din Kabbashi, the council spokesman.

Earlier, Tibor Nagy, the US assistant secretary of state for Africa, met with the head of the council, Lieutenant General Abdel Fattah al-Burhan, in Khartoum. Veteran diplomat Donald Booth, who was appointed US envoy to Sudan on Wednesday, was also present.

"Amb Booth and I pressed TMC Chairman Gen Burhan to take steps to allow successful talks to resume: Stop attacks on civilians; Withdraw military from Khartoum; Allow for an independent investigation of the horrible June 3 attack on the peaceful sit-in and other recent violence; And stop repression of free speech and the internet," Nagy said on Twitter.

Speaking at a press conference, council spokesman Kabbashi said the United States had given it several pieces of advice.

"But they are not orders," he said, while also rejecting the idea of an international investigation.

"We do not accept it because we are a sovereign state and we have our judicial apparatus."

Human rights groups have criticised an ongoing internet shutdown in Sudan. In an apparent response to the criticism, Kabbashi said social media posed a threat to the country. "We do not allow that at the moment," he said.

After meeting Nagy on Wednesday, the main opposition alliance said it would only participate in indirect talks and it would impose other conditions.

The bloodshed in Sudan has prompted concern from world powers including the United States, which sanctioned Sudan under Bashir over its alleged support for militant groups and the civil war in Darfur.

Trade sanctions were lifted in 2017 but Sudan is still on the US list of state sponsors of terrorism, which prevents it from accessing badly needed funding from international lenders. Washington has previously said it will not take Sudan off the list while the military remains in power.

Stability in the nation of 40 million is crucial for a volatile region struggling with conflict and insurgencies from the Horn of Africa to Egypt and Libya.
The military council has been bolstered by support from Saudi Arabia and the United Arab Emirates, which between them have offered $3 billion in aid.

Last week, Ethiopian Prime Minister Abiy Ahmed visited Khartoum to mediate between the military council and the opposition. Kabbashi said Abiy had proposed that negotiations between the two parties move to Addis Ababa, but the council rejected the proposal.

Sudan`s state prosecutor`s office said early on Thursday that Bashir had been charged with corruption after the completion of an investigation. The charges were related to laws on "suspected illicit wealth and emergency orders," the office said, without giving more details.

Bashir had already been charged in May with incitement and involvement in the killing of protesters. Prosecutors had also ordered his interrogation on suspicion of money laundering and financing terrorism.

It has not been possible to get a comment from Bashir since his removal.