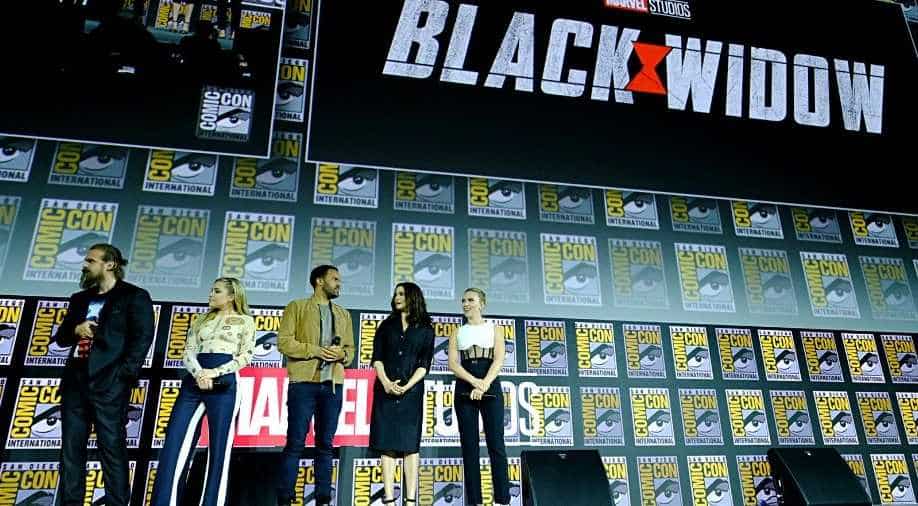 Giant screens in Hall H revealed a timeline of films and television shows scheduled for the next two years including new outings for popular characters Thor, Black Widow, Doctor Strange and Loki.

Marvel's all-conquering superheroes ripped through Comic-Con Saturday as the next batch of blockbuster movies were revealed to a hysterical crowd and Disney declared the wait for "Avengers: Endgame" to break the global box office record over.

Hollywood A-listers Angelina Jolie, Salma Hayek and Rachel Weisz will join the most lucrative franchise in film history, it was revealed in an announcement prompting a collective fan meltdown and ending frenzied speculation over the films' future.

They appeared on stage in San Diego alongside Scarlett Johansson, Chris Hemsworth, Natalie Portman and others who will return in the upcoming -- and sure to be multi-billion-grossing -- movies.

Giant screens in Hall H revealed a timeline of films and television shows scheduled for the next two years including new outings for popular characters Thor, Black Widow, Doctor Strange and Loki.

He finished the show -- the most anticipated of the four-day event -- by announcing that Oscar-winner Mahershala Ali will front a "Blade" reboot.

The Marvel films have collectively grossed over $22 billion at the global box office.

Jolie and Hayek will front ensemble film "The Eternals" in November 2020. It will be followed in February 2021 by "Shang-Chi and the Legend of the Ten Rings," the first Marvel superhero film to be led by an Asian actor.

Marvel's next round of new films kick off with Johansson's "Black Widow" in May.

Disney simultaneously announced that the series' most successful film, Endgame, will become the highest-grossing movie of all time this weekend.

"You have to shout out to James Cameron who held that title for a long time," said Feige. "But for right now today in Hall H, thanks to you, Avengers: Endgame is the biggest film of all time."

Both films are owned by Disney following its takeover of 21st Century Fox, and had their box office figures revised upwards due to new receipts data, it said.

Earlier, an emotional Patrick Stewart said he was "deliriously happy" to be returning to "Star Trek" a generation later, declaring that "you cannot have too many franchises in a career."

His voice choking, Stewart said he had felt reluctant to return to the multi-billion-dollar sci-fi franchise until meeting a writing team including Pulitzer-winning author -- and now showrunner -- Michael Chabon.

"As soon as we began talking in the writers' room, that powerful emotion came surging back," he said.

The trailer revealed the surprise return of other popular characters including Data (Brent Spiner) and Seven of Nine (Jeri Ryan).

Unseen footage showed an age-worn, soul-searching Picard struggling to adjust to life back on Earth.

Elsewhere, producers of The CW's "Batwoman" screened a pilot of the first superhero TV show led by an openly lesbian character.

The pioneering show has stirred controversy in some of the internet's darker depths.

Star Ruby Rose missed the event due to ongoing filming, but executive Caroline Dries told a panel event that the studio was proud to promote diversity and representation.

HBO revealed a trailer for season three of smash futuristic sci-fi Westworld, where the action has shifted from a Wild West-inspired theme park to one set under Nazi occupation.

New cast member Aaron Paul said joining the show had been an "out of body" experience.

"I'm tripping out right now, I'm such a psychotic fan of Westworld," said the "Breaking Bad" actor, who plays a construction worker.

Based on a 2013 film and starring Oscar-winner Jennifer Connelly, the TV show depicts the conflict between the train's starkly divided classes.

Released in spring 2020, it has already been renewed for a second season.