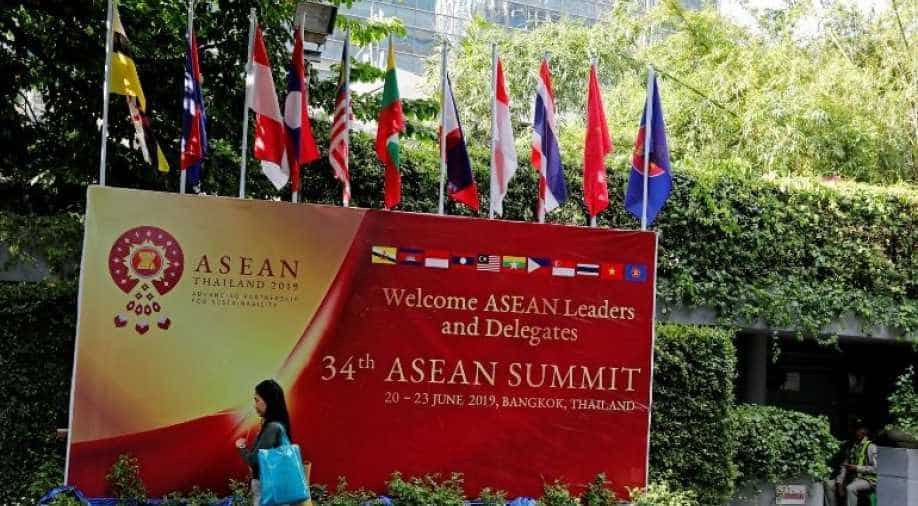 Disputes in the flashpoint South China Sea, Myanmar's persecution of Rohingya Muslims and plastic pollution in the seas are also set to be discussed at the two-day ASEAN summit, chaired by Thailand.

Southeast Asian leaders gathered in Bangkok on Saturday determined to drive forward the world's largest commercial pact, with the trade war between the US and China clouding the outlook for their export-led economies.

Disputes in the flashpoint the South China Sea, Myanmar's persecution of Rohingya Muslims and plastic pollution in the seas are also set to be discussed at the two-day Association of Southeast Asian Nations (ASEAN) summit, chaired by Thailand.

But trade will take centre stage with ASEAN leaders keen to hasten the signing of a China-drafted commercial deal covering around half the world's population.

It is seen as a mechanism for China to draft the rules of Asia-Pacific trade, following a US retreat from the region.

Shortly after his election, President Donald Trump pulled the US from the Trans-Pacific Partnership (TPP) -- which would have been the world's largest trade deal -- slamming it as an American "job killer".

While tit-for-tat tariffs between the world's biggest two economies have seen some manufacturers flee China to safer ASEAN hubs, economists say the big picture for global growth is bleak.

"Free trade is definitely what we need here in this region," he said, adding that the US-China trade row has resulted in "the entire world catching a cold".

Progress on the deal has stuttered in recent months with India digging in over fears cheap Chinese goods could flood its massive consumer market.

Australia and New Zealand have also raised concerns over a lack of labour and environmental safeguards.

Malaysian leader Mahathir Mohamad on Friday raised the prospect of a joust with Myanmar over the Rohingya, the Muslim minority driven in massive numbers into Bangladesh by waves of concussive violence.

"We hope something can be done to stop the oppression," he said.

ASEAN foreign ministers discussed the repatriation of more than 740,000 Rohingya refugees that have fled into Bangladesh, according to Thai foreign minister Don Pramudwinai.

The bloc has come under fire for suggesting the refugees should go back to Myanmar within two years, according to a leaked report seen by AFP -- though virtually none have volunteered to go back so far, citing safety concerns.

"It (repatriation) will be quick, Myanmar knows this process is being watched by everyone," Don told reporters.

The bloc is also poised to agree on a declaration to "prevent and significantly reduce" marine debris -- including plastic -- across the region, according to a draft text seen by AFP.

Though the statement is the first of its kind for the region, which dumps millions of tonnes of plastic waste into the ocean every year, activists fear it doesn't go far enough in curbing single-plastic use.

Regional leaders are also set to tackle thorny South China Sea issues at the weekend meet, with a draft Code of Conduct agreement up for review, though observers doubt any major progress will me made to inch the deal closer to completion.

Discussions around the resource-rich waterway that Beijing claims most of were overshadowed by a recent dust-up in the sea between a Chinese ship that rammed a Filipino fishing boat and caused it to sink.

Manila said a joint investigation into the incident has been launched, adding that the run-in would not derail Code of Conduct talks.