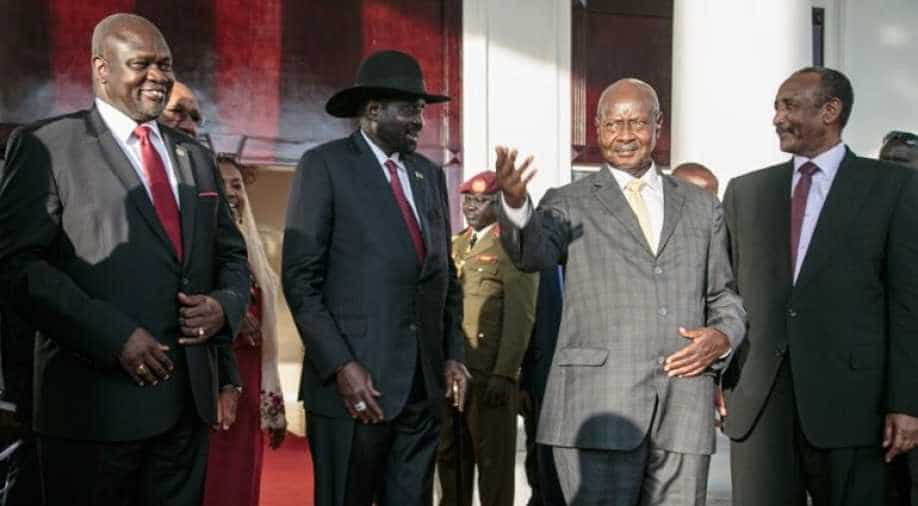 The two rivals, whose fallout in 2013 sparked a conflict that has left hundreds of thousands dead, were granted the extension after a rare face-to-face meeting held with regional heavyweights in Uganda.

South Sudan President Salva Kiir and rebel chief Riek Machar on Thursday were given another 100 days to form a power-sharing government after failing to resolve differences, a fresh delay that prompted a sharp US warning that the fledgling nation needed new leaders.

The two rivals, whose fallout in 2013 sparked a conflict that has left hundreds of thousands dead, were granted the extension after a rare face-to-face meeting held with regional heavyweights in Uganda.

It is the second time the deadline has been pushed back since the rivals signed a truce last September that brought a pause to fighting.

Both sides had agreed to join forces in a coalition government by November 12. But with the date looming and key issues far from resolved, regional leaders brokered high-level mediations in Entebbe to chart a way forward.

"It was really impossible to have them reach agreement in five days. We've given them three months and we will continue our engagement," Ugandan Foreign Minister Sam Kutesa told AFP following the closed-door discussions at State House in Entebbe.

The meeting "agreed to extend the pre-transitional period... and to review progress after fifty days from that date", Kutesa said afterwards, reading from an official communique.

The United States, a major backer of the impoverished nation, voiced exasperation with the delay and said it would "review our relationship" with South Sudan's government.

"This inability to meet their own deadline calls into question their suitability to continue to lead the nation's peace process," Tibor Nagy, the top US diplomat of Africa, said of Kiir and Machar.

"The US is considering all possible options to put pressure on those individuals who would impede peace and promote conflict," he wrote on Twitter.

The United States has previously threatened targeted sanctions without a prompt government formation, although an official earlier ruled out ending Washington's roughly $1 billion in humanitarian assistance.

Despite US frustration at the slow progress, some observers warned that pushing the foes to form a unity government before disagreements over security and state boundaries were resolved threatened to plunge the country back into war.

"Another extension is far preferable than a return to conflict," said Alan Boswell, senior analyst at the International Crisis Group think tank.

"Regional mediators must step up at the highest levels to finally resolve the sticking points blocking the peace process from moving forward."

Machar, who lives in exile in Khartoum and cannot travel freely in the region, had asked for more time so that the impasse over security and territory arrangements could be overcome.

The rebel leader warned that if these were not addressed, the country would see a repeat of fighting in 2016, when an earlier peace deal collapsed, worsening the conflict.

Machar, a former deputy to Kiir, fled South Sudan on foot under a hail of gunfire and has only returned home on rare occasions, fearing for his safety.

Kiir had said he was ready to form a new government and had threatened to do it alone.

The creation of the coalition government, a key pillar of the September 2018 peace deal between the rivals, had already been delayed once in May when regional leaders brokered a six-month extension.

The United Nations Security Council, on the eve of the Entebbe meeting, declared that fully implementing "all provisions of the peace agreement remains the only path that will set the country towards the goal of peace, stability and development".

A cornerstone of the accord was that fighters from all sides would be gathered into military camps and trained as a unified army, a process dogged by delays and lack of funding.

Little progress has been made on negotiations around state boundaries, another major sticking point.

The European Union, in a statement Thursday before the extension was announced, urged the warring parties to demonstrate "genuine will to build peace" and set realistic deadlines for resolving outstanding issues.