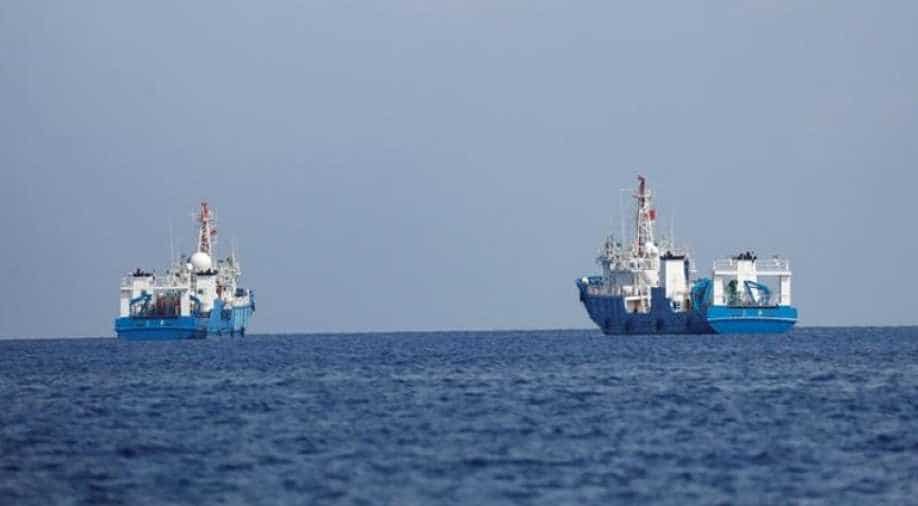 While the Pentagon plays down patrols close to Chinese-controlled reefs and islands in the South China Sea, Beijing is sounding the alarm about them, seeking to justify what experts say will be an even greater presence in the disputed region.

Chinese officials publicized the latest US "freedom of navigation patrol", protesting the deployment last week of the destroyer USS Hopper to within 12 nautical miles of Scarborough Shoal, an atoll west of the Philippines which Beijing disputes with Manila.

It was the second time in recent months that confirmation of a patrol came from Beijing, not Washington, which had previously announced or leaked details.

Bonnie Glaser, a security expert at Washington's Center for Strategic and International Studies, said while the administration of US President Donald Trump had a policy of keeping the patrols regular but low key, China was willing to publicly exploit them to further their military ends.

"It is difficult to conclude otherwise," she said.

"Even as it pushes ahead with these (patrols), I don't think the Trump administration has really come to terms with what it will tolerate from China in the South China Sea, and what it simply won't accept, and Beijing seems to grasp this."

Some regional diplomats and security analysts believe that will involve increased Chinese deployments and the quicker militarization of China's expanded facilities across the Spratlys archipelago.

While US officials did not target China in their comments, couching freedom-of-navigation patrols as a "routine" assertions of international law, Beijing was quick to cast Washington as the provocateur.

The Communist Party's official People's Daily newspaper on Monday accused the US of upsetting recent peace and co-operation and "wantonly provoking trouble", saying China had must now strengthen its presence in the strategic waterway.

In recent years, China has built up several reefs and islets into large-scale airstrips and bases as it seeks to assert and enforce its claims to much of the sea, through which some $3 trillion in trade passes annually. The Philippines, Vietnam, Malaysia and Brunei, as well as Taiwan, hold rival claims.

Zhang Baohui, a mainland security analyst at Hong Kong's Lingnan University, told Reuters he believed Beijing was rattled by Trump's sharpening Asia strategy and they might be tempted to react in the South China Sea, even after months of relative calm.

"We can perhaps expect the Chinese to push ahead with militarisation as retaliation," he said.

While most analysts and regional envoys believe China remains keen to avoid an actual conflict with the significantly more powerful US navy in the South China Sea, it is working to close the gap.

China has added bunkers, hangars and advanced radars on its new runways in the Spratlys, although it has not fully equipped them with the advanced surface-to-air and anti-ship missiles they use to protect the Paracels grouping further north.

Similarly, Beijing has yet to land jet fighters in the Spratlys - test flights some experts are expecting this year.

The latest patrol was at least the fifth such patrol under the Trump administration and the first to Scarborough - one of the more contentious features in the region.

Scarborough, once a US bombing range, was blockaded by the Chinese in 2012, prompting the Philippines to launch its successful legal case in the Hague against China's excessive territorial claims.

China allowed Filipino fishermen back to Scarborough's rich waters last year, but it remains a potential flashpoint as both sides claim sovereignty and China maintains a steady presence of ships nearby.

While experts and regional envoys expect China to ramp up operations from the Spratlys, none expect it to build on Scarborough - something widely believed to be a red line that would provoke the United States, given its long-standing security treaty with the Philippines.

Shi Yinhong, who heads the Center for American Studies at Beijing's Renmin University, said China had "lived with" US patrols for several years but the key facts on the ground remained in China's favour and broader tensions had "improved remarkably".

"These islands, especially those with reclaimed land and military capability already deployed, they're still in Chinese hands," Shi, who has advised the Chinese government on diplomacy, told Reuters.

"I don't think Trump has the stomach and the guts to change this fundamental status quo."