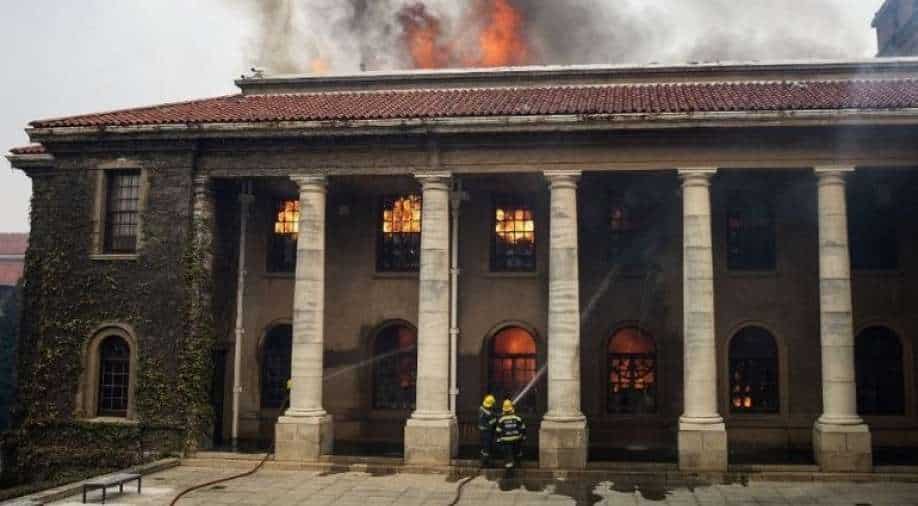 Firefighters try, in vain, to extinguish a fire in the Jagger Library, at the University of Cape Town, after a forest fire came down the foothills of Table Mountain, setting university buildings alight in Cape Town, on April 18, 2021. Photograph:( AFP )

A wildfire that broke out in Table Mountain in Cape Town, South Africa, has damaged properties and historic buildings and spread to a nearby university.

One firefighter was injured and University of Cape Town students were evacuated, according to government authorities.

Table Mountain National Parks (TMNP) confirmed that the location of the fire was immediately above Philip Kgosana drive.

The City of Cape Town said the origin of the blaze is "a vacated vagrant fire". One of the major contributors to the rapid rate of spread was the very old pine trees and their debris, it added.

“The fire created its own wind that further increased the rate of spread. The excessive amount of smoke and related updrafts made it impossible for the aerial support to slow the rate of spread,” Philip Prins, TMNP Fire Manager said.

TMNP and the City of Cape Town have four helicopters currently operating in the areas. There are numerous other water tankers and firefighting vehicles on the scene managed between TMNP and the City.

“It can be confirmed that the Rhodes Memorial restaurant has unfortunately burnt down. The fire has also spread to the veld above the University of Cape Town (UCT)  upper campus and to the areas below the M3. Roads have been closed,” it said.

The fire spread to the veld above the UCT and forced the university to evacuate as strong winds caused the fire to spread.

“All UCT students have been evacuated from campus by emergency services support staff. We have taken them to predetermined locations,” the University said on its social media page.

City of Cape Town Mayor, Dan Plato noted that one firefighter was being treated for burn wounds in the hospital.

“Property including private homes, Rhodes Memorial restaurant, and historical structures such as the Mostert’s Hill windmill have been damaged,” the Mayor said.

“It is tragic that literary treasures have been lost at the UCT library, but I have been informed that some of the most valuable works were saved by the quick activation of roller doors,” Plato added.

Members of the public are going all out to help students, firefighters, and everyone affected by the fire. Social media was abuzz with many even offering their homes as accommodations to those affected.