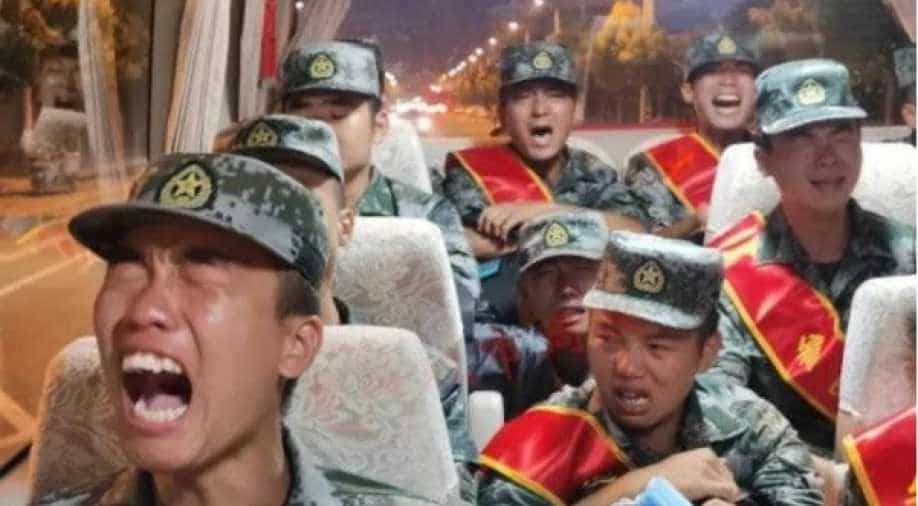 A group of Chinese soldiers crying inside a bus. Photograph:( Twitter )

According to Taiwanese media, the video was reportedly shot at Fuyang railway station while the troops were preparing to head to a military camp in Hebei province.

A war of words has broken out between Chinese and Taiwanese media over a recent video of Chinese soldiers being sent to the Sino-India Border.

In the video, which surfaced on social media a week ago, a group of People's Liberation Army soldiers can be seen sobbing.

The recruits were reportedly heading towards the India-China border at Ladakh to face the Indian army.

The video, published last week by a local Chinese network, showed the young soldiers inside a bus and singing a popular Chinese military song.

Nearly all of them seemed emotional, with some crying. Some Taiwanese media houses seemed to mock the soldiers for crying, interpreting it as a sign of fear against deployment at the border with India, amid the ongoing tension in Ladakh.

The video was shared online in china, as well as on Facebook by a Pakistani comedian.
Taiwan news reported, that the troops were struggling to sing the words to a military song.

According to Taiwanese media, the video was reportedly shot at Fuyang railway station while the troops were preparing to head to a military camp in Hebei province.

In a rebuttal to the mockery of its soldiers, the Chinese media slammed Taiwan news, saying they had deliberately misinterpreted the emotional video.

China's newspaper global times, stated that the soldiers were emotional as they had just bid farewell to their parents.

It further added that the soldiers were singing two military songs - 'green flowers in the army', and 'go home when you celebrate your work'.

Tensions between India and china have been high since the standoff between Indian and Chinese armies Galwan valley in June.

At least 20 Indian soldiers had died in the faceoff. While china has not officially released the number of its casualties, US intelligence revealed that 35 Chinese soldiers had lost their lives in the bloody clash.