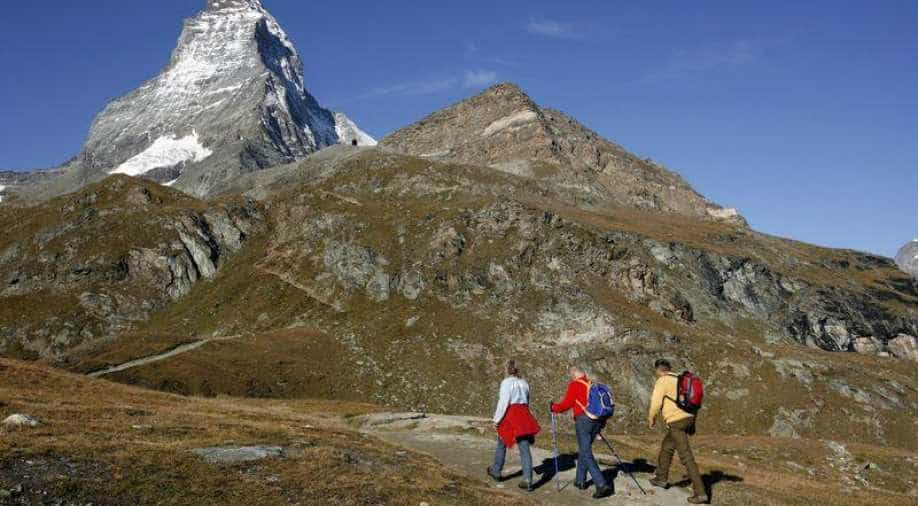 File Photo: Zermatt is home to some 5,500 inhabitants and has the capacity to accommodate 13,400 tourists spread across hotels and rental apartments. Photograph:( Reuters )

Heavy snowfall has trapped some 13,000 tourists at Zermatt, one of Switzerland's most popular ski stations, the Alpine resort said on Tuesday.

The snow has blocked all roads and the train leading to the resort in the southern Swiss canton of Valais, which was also hit by some power outages, head of the station Janine Imesch said.

There are currently "around 13,000 tourists at Zermatt," she said, while the station website warned that "arrivals and departures are not possible at the moment."

The main access road has been closed since Monday, while the train was halted late last night, she said.

Zermatt is home to some 5,500 inhabitants and has the capacity to accommodate 13,400 tourists spread across hotels and rental apartments.

But the stranded tourists will not be able to take advantage of the abundant snow for the time being, due to the high risk of avalanches in the area.

"It is not possible to do downhill or cross country, but that's ok. It's a bit romantic," Imesch said, adding "there is no panic."

A reconnaissance flight is planned over the area to help determine the situation and how to proceed.

A number of other Valais villages were also isolated by the heavy precipitation. The Simplon region of Valais was hit by two metres of snow in a 24-hour period, the ATS news agency reported.

Mud and rockslides, as well as flooding, have forced the closure of a number of roads across Valais, as has the risk of avalanches, which regional police have said is currently at the highest possible level.

At lower altitudes, heavy rains have meanwhile forced the evacuation of around 20 people from the tiny village of Eyholz, and the hamlet of Mottec was also emptied as a precaution, the RTS broadcaster reported.

Beyond Valais, the first men's World Cup downhill training run in Wengen, in the canton of Bern, was cancelled Tuesday due to snow and high winds, organisers said.

Overnight winds of up to 200 kilometres per hour also meant there was significant damage to infrastructure on the course, notably at the finish area where tents and the stands were hit. The piste itself was unaffected.