'Situation may change quickly': Over 400,000 flee Congo amid fears of another volcanic eruption 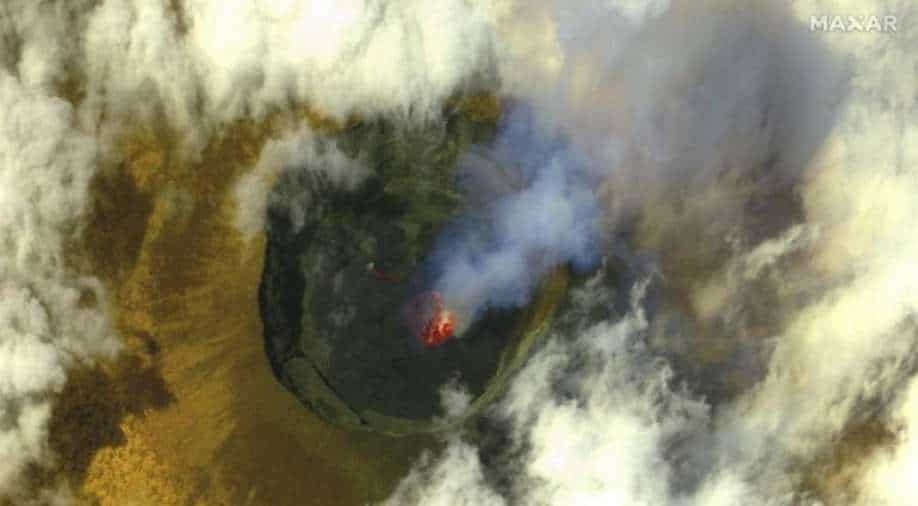 This handout satellite image released on May 25, 2021 by Maxar Technologies shows an overview before the eruption of the Mt Nyiragongo volcano near Goma, Democratic Republic of Congo, that sent lava toward the city on May 20, 2021 Photograph:( AFP )

Last weekend, Nyiragongo erupted - instilling fear among the inhabitants of regions nearby Africa’s most active volcano

Amid fears that the Mount Nyiragongo volcano may erupt again, over 400,000 people have fled the city of Goma in the DR Congo. Tens of thousands of people are gathered west of the city in Sake, AFP reported. Authorities are gearing up to help all in need.

Last weekend, Nyiragongo erupted - instilling fear among the inhabitants of regions nearby Africa’s most active volcano.

Over three dozen lives have been lost to the eruption from last week. Homes of 20,000 were also destroyed in the event.

Since the eruption, hundreds of aftershocks have been reported in the area. Scientists are worried about a “liming eruption”, which could fill the area with suffocating carbon dioxide. Experts carrying out a risk assessment at the volcano's summit, said "seismicity and ground deformation continues to indicate the presence of magma under the Goma area, with an extension under Lake Kivu."

"People should remain vigilant and listen to news bulletins, as the situation 'may change quickly'", it warned.

A report from Friday showed that 80,000 households constituting 400,000 people had evacuated the area on Thursday after a “preventive” evacuation was ordered.

Rwandan President Paul Kagame said those evacuating needed "urgent, global support". Most of the people fled to Sake or the Rwandan border in the northeast. Many have also left the are via boat across Lake Kivu.

Over 10,000 people are currently taking refuge in Bukavu along the southern bank of Lake Kivu, according to governor Theo Ngwabidje. On Friday afternoon, fresh fears erupted in the minds of people after black smoke was seen emerging from the crater.

General Constant Ndima, the military governor of North Kivu province has reportedly ordered the evacuation of many districts. This affects nearly 400,000 out of Goma's 600,000 residents, according to an estimate provided by the United Nations humanitarian agency OCHA.