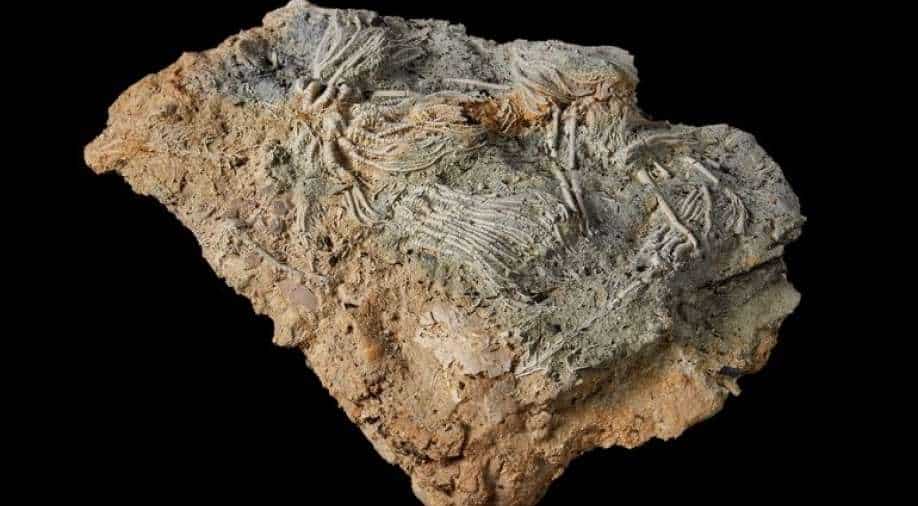 One of the fossils discovered at the site. Image source: National History Museum website Photograph:( Others )

A secret location in the Cotswolds has yielded one of the most impressive discoveries of perfectly preserved fossils of Jurassic echinoderms.

In an extremely rare finding, the Natural History Museum has discovered perfectly preserved specimens of species from all these groups.

As per the Natural History Museum's website, their Senior Curator Dr Tim Ewin, says, "The exceptional preservation of so many individuals belonging to diverse echinoderm groups is exceptional and makes the site comparable to the best in the world".

This site which is estimated to be 167 million years old was discovered by two non-professional palaeontologists, Sally and Neville Hollingworth, who then alerted the Museum to its possible significance.

The site is believed to have been a warm, relatively shallow sea once, which had a high level of nutrients that attracted large numbers of echinoderms.

According to the researchers, the area appeared to have been rapidly covered by a mudslide, which might have happened due to a sudden event.

This is evident from a number of fossilised stalked and unstalked crinoids which were discovered in what is called the 'death pose' i.e. some of the animals were found with their arms around their bodies, trying to shield themselves.

The result of the sudden event was the preservation of almost an entire ecosystem of exceptional quality.

Sea lilies, feather stars, and starfish fossils are historically rare because their multiple skeletons quickly crumble after death, which can only be preserved through immediate burial.

While many of the specimens are of known species, the team believes that it has discovered three new species so far, new varieties of brittle star, feather star, and sea cucumber.

While several other species found on the site were already known to science, many were known through hundred-year-old descriptions that were based on incomplete or poorly prepared specimens.

Thus, the new site will offer valuable information about how these iconic groups evolved and diversified into the ecologically significant organisms they are today.

After three days of excavation, the team has collected about 100 slabs and is preparing them for further analysis and eventually for public engagement.