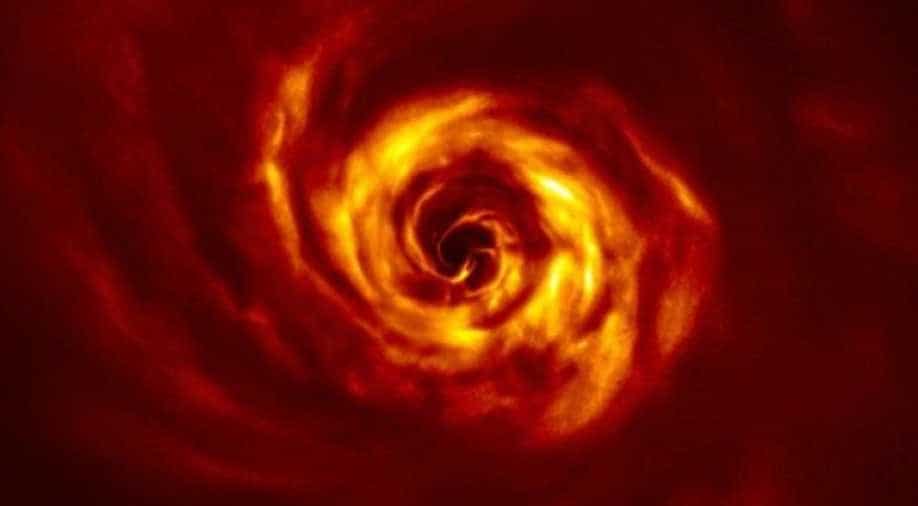 According to a study published in the journal Astronomy and Astrophysics, it would be the first direct evidence of a planet coming into existence.

Scientists have captured the stunning image of a cosmic spiral along with the first glimpse of a new planet.

Using the European Southern Observatory's Very Large Telescope (ESO's VLT), researchers spotted a glowing orange spiral with a "twist" marking the spot where they believe a planet may be forming.

According to a study published in the journal Astronomy and Astrophysics, it would be the first direct evidence of a planet coming into existence.

A team led by Anthony Boccaletti, an astronomer at the Observatoire de Paris, PSL University, wanted to take a closer look at this nascent world, which has produced some of ''the most spectacular spirals imaged so far.''

Astronomers observed the possible baby planet forming a spiral of dust and gas around a young star known as AB Aurigae, located 520 light years away from Earth in the constellation Auriga.

Scientists believe that this spiraling effect is the signature of interactions between budding planets and the gassy dusty material that both surrounds and nourishes them.

They know planets form as cold gas and dust collide with one another around stars over billions of years, but these new observations provide crucial data to paint a clearer picture of the process.

The mass of these young worlds produces wave-like ripples in the gas disk, which are then distorted into spirals as the planet orbits its star. At the same time as it sculpts these disk spirals, the baby planet also incorporates gas into its growing body.

''In this way, the planet accretes and accumulates the gas and it forms a huge envelope we see in the giant planets in our solar system,'' such as Jupiter or Saturn, Boccaletti said.

''To build these atmospheres of gas, you really need something to bring the gas from somewhere and put it on the planet. This is the process we believe is working for these kinds of planets.''

Boccaletti and his colleagues set out to image this tantalizing feature in more detail with the help of a specialized instrument called Spectro-Polarimetric High-contrast Exoplanet REsearch (SPHERE), which is located at the Very Large Telescope in Chile.

SPHERE is designed to look for exoplanets, planets that orbit stars other than the Sun, and it is equipped with a coronagraph that can blot out the distracting light from the host stars of these planets.