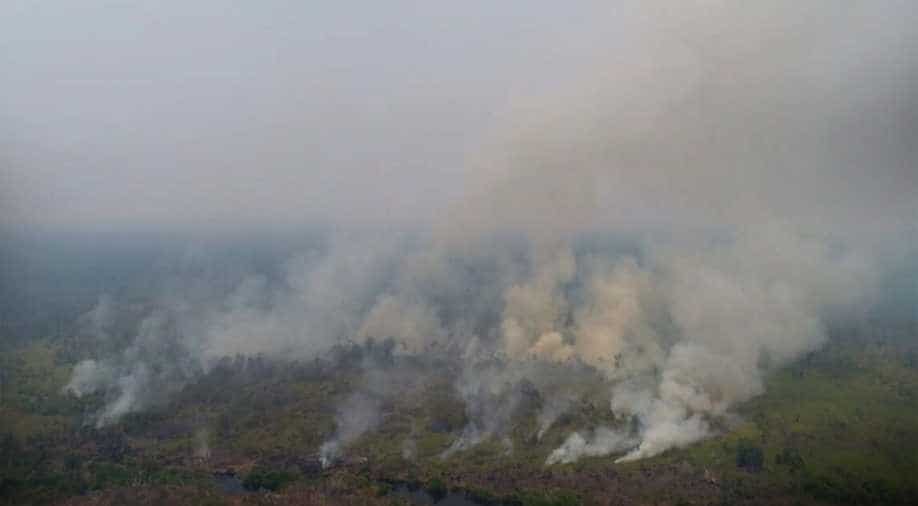 Illegal fires to clear land for agriculture are blazing out of control on Sumatra and Borneo islands, with Jakarta deploying thousands of security forces and water-bombing aircraft to tackle them.

Toxic haze from Indonesian forest fires closed schools and airports across the country and in neighbouring Malaysia Wednesday, while air quality worsened in Singapore just days before the city's Formula One motor race.

Illegal fires to clear land for agriculture are blazing out of control on Sumatra and Borneo islands, with Jakarta deploying thousands of security forces and water-bombing aircraft to tackle them.

Indonesian blazes belch smog across Southeast Asia annually, but this year's are the worst since 2015 and have added to concerns about wildfire outbreaks worldwide exacerbating global warming.

On Wednesday, air quality deteriorated to "very unhealthy" levels on an official index in many parts of peninsular Malaysia, to the east of Sumatra, with the Kuala Lumpur skyline shrouded by dense smog.

Nearly 1,500 schools were closed across Malaysia due to air pollution, with over one million pupils affected, according to the education ministry.

A growing number of Malaysians were suffering health problems due to the haze, with authorities saying there had been a sharp increase in outpatients at government hospitals many suffering dry and itchy eyes.

Indonesian authorities said hundreds of schools in hard-hit Riau province on Sumatra were shut, without providing a precise number, while about 1,300 were closed in Central Kalimantan province on Borneo.

Borneo is shared between Indonesia, Malaysia and Brunei.

Poor visibility closed seven airports in the Indonesian part of Borneo, the transport ministry in Jakarta said. Scores of flights have already been diverted and cancelled in the region in recent days due to the smog.

The worsening pollution increased fears that this weekend's Formula One race may be affected. Organisers say the possibility of haze is one of the issues in their contingency plan for Sunday's showpiece night race, but have not given further details.

The city-state's tourism board said spectators would be able to buy masks as protection from the haze if conditions did not improve and assistance would be provided for those who feel unwell, the Today news portal reported.

The fires have sparked tensions between Indonesia and Malaysia.

Indonesia's environment minister initially suggested the haze was from Malaysian fires despite satellite data showing hundreds of blazes in Indonesia and only a handful in its neighbour, prompting anger from her Malaysian counterpart.

Indonesia later sealed off dozens of plantations where it said fires were blazing, including some owned by Malaysia-based firms, deepening the row.

But Prime Minister Mahathir Mohamad, who has struck a diplomatic tone throughout the crisis, said Malaysia may pass legislation forcing its companies to tackle fires on plantations abroad.

Malaysia wants its firms with sites overseas to put out blazes contributing to the haze, he said, adding: "Of course, if we find they are unwilling to take action, we may have to pass a law to make them responsible."

The Indonesian government has insisted it is doing all it can to fight the blazes. But this year's fires have been worsened by dry weather and experts believe there is little chance of them being extinguished until the onset of the rainy season in October.

Indonesia's meteorology, climate and geophysics agency said Wednesday that over 1,000 hotspots areas of intense heat detected by satellite that indicate a likely fire had been sighted, most of them on Sumatra.