Russian Presidential Election: Many Putin supporters not turning out as outcome is foregone conclusion 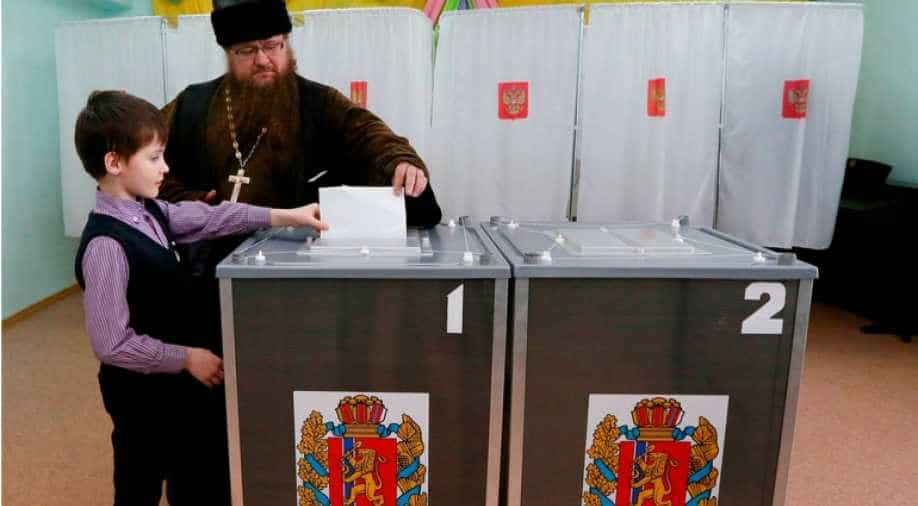 Orthodox priest Sergei Ryzhov and his son Luka cast a ballot at a polling station during the presidential election. Photograph:( Reuters )

With current President Vladimir Putin widely expected to win, the biggest headache for his campaign was the possibility many voters, including Putin supporters, would not bother to come to the poll stations as they feel the outcome is a foregone conclusion.

Putin opponents alleged employers with close ties to the state were ordering staff to go and vote and send back evidence.

As many as 54.69 per cent of voters have cast their ballots in Kolyma, beating the record of the 2012 election. "The most active voters are in the Severo-Evensky District, where the voter turnout reached 73 per cent," the regional election commission said.

"The turnout this year is higher than in 2012. That is evidenced by the data as of 10:00 a.m. [07:00 GMT] and the noon ... Today we have already received 250 reports about violations. About a half of them were not confirmed and turned out to be fake," co-chair of the Russia Elects observers' movement Elena Babchenkova said on Sunday, adding that the voter turnout this year was higher than in 2012.

As of 3 p.m. local time (07 a.m. Moscow Time) the voter turnout in the Sakhalin Region reached 48.34 per cent. "The most active voters are in the Kuril Islands, in Iturup where 67.24 per cent voted some 5 hours before the ballot stations’ closure. Some 47.21 per cent voters cast their votes in Yuzhno-Sakhalinsk."

Babchenkova pointed out that in some cases fake news was disseminated deliberately and added that all the incidents were solved at the site without requests to the Central Election Commission.

Social media were filled with extracts of the official online streams from the polling stations, in which the actions of voters raise suspicion of ballot stuffing.

The presidential election is set to give Vladimir Putin a runaway victory, the only possible blemish for the Kremlin being if large numbers of voters do not bother taking part because the result is so predictable.

Opinion polls give Putin, the incumbent, support of around 70 per cent, or nearly 10 times the backing of his nearest challenger. Another term will take him to nearly a quarter century in power - a longevity among Kremlin leaders second only to Soviet dictator Josef Stalin.