Russian police detain over 800 in opposition crackdown in Moscow 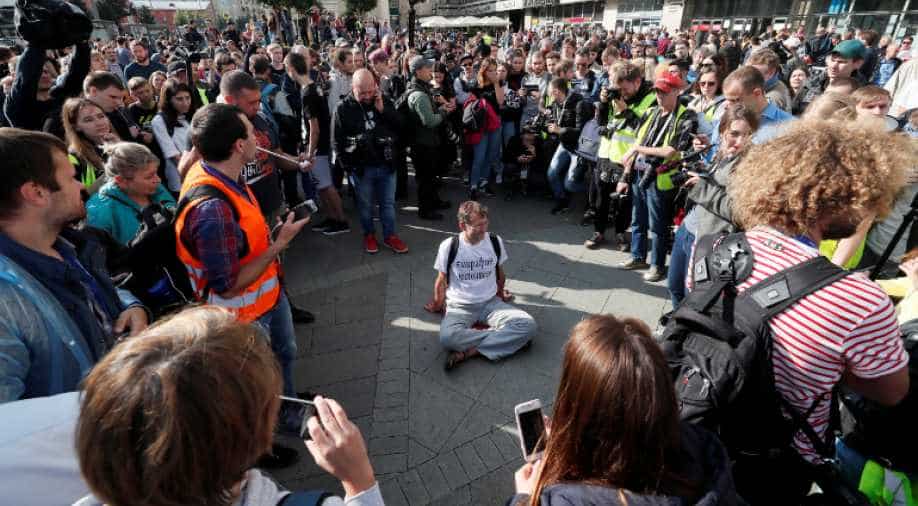 People take part in a rally calling for opposition candidates to be registered for elections to Moscow City Duma, the capital's regional parliament, in Moscow, Russia August 3. Photograph:( Reuters )

Police said they had detained 600 and said 1,500 had attended the protest, though footage of demonstrations which flared in different parts of Moscow suggested many more had taken part

Russian police forcibly detained over 800 people attending a protest in Moscow on Saturday to demand free elections, including prominent activist Lyubov Sobol, after authorities warned the demonstration was illegal.

Police removed Sobol from a taxi and bundled her into a van minutes before the start of what anti-Kremlin activists described as a peaceful walk to protest against the exclusion of their candidates from an election next month.

Soon after the start of the protest, a Reuters reporter saw several hundred people milling around at one of the designated protest points in central Moscow. Minutes later, a line of riot police began to squeeze people out of the area.

OVD-Info, an independent monitoring group, said police had detained 828 people, in some cases beating them with truncheons as they lay on the floor. Reuters reporters witnessed dozens of arrests. In one case police carried off a man as he clung upside down to his bicycle.

Police said they had detained 600 and said 1,500 had attended the protest, though footage of demonstrations which flared in different parts of Moscow suggested many more had taken part.

Saturday's protest was smaller than one a week earlier but underlined the determination of some Kremlin critics -- especially younger people -- to keep pressing to open up Russia's tightly-choreographed political system.

The focus of protesters' anger is a prohibition on a number of opposition-minded candidates, some of whom are allies of jailed opposition politician Alexei Navalny, from taking part in a September election for Moscow's city legislature.

That vote, though local, is seen as a dry run for a national parliamentary election in 2021.

Authorities say opposition candidates failed to collect enough genuine signatures to register. The excluded candidates say that is a lie and insist on taking part in a contest they believe they could win.

"They (the authorities) are wiping their feet on us," said Elena, a student attending Saturday's protest.

Another attendee, Yevgeny Snetkov, a 61-year-old engineer, described as brazen the way the authorities had prevented opposition candidates from running. "I had no option left but to protest," he said.

Some protesters chanted "Putin is a thief" as they marched.

Observers said the police presence was one of the biggest at such a protest in nearly a decade. Mobile internet access was cut in some areas and police cordoned off swathes of central Moscow to stop people gathering.

At a similar protest a week earlier, police detained more than 1,300 in one of the biggest security operations of recent years that brought wide international condemnation.

Authorities carried out a new round of detentions and home searches before Saturday's protest and opened criminal proceedings for what they term mass civil unrest, an offence which carries a penalty of up to 15 years in jail.

Activists say the Russian constitution allows them to freely protest. But authorities say they need to agree the timing and location of any demonstrations in advance, something that was not done ahead of Saturday's protest.

Opposition activists say the authorities have repeatedly refused to allow protests in central Moscow, leaving them with no choice but to go ahead anyway.

At least eight of Sobol's allies, including Navalny, are in jail for breaking tough protest laws. The ruling United Russia dominates the national parliament and Navalny plus his allies are starved of media air-time.

Russian investigators said on Saturday they had opened a criminal investigation into the alleged laundering of 1 billion roubles ($15.3 million) by an anti-corruption foundation which Navalny set up. Navalny and his allies say the foundation is transparently financed from public donations.

President Vladimir Putin and the Kremlin have not commented on the standoff with the opposition, but Moscow prosecutors on Friday warned would-be protesters that Saturday's demonstration had not been approved and its organisers could be brought to account.

At well over 60 per cent, Putin's approval rating is still high compared with many other world leaders, but is lower than it used to be due to discontent over years of falling incomes.