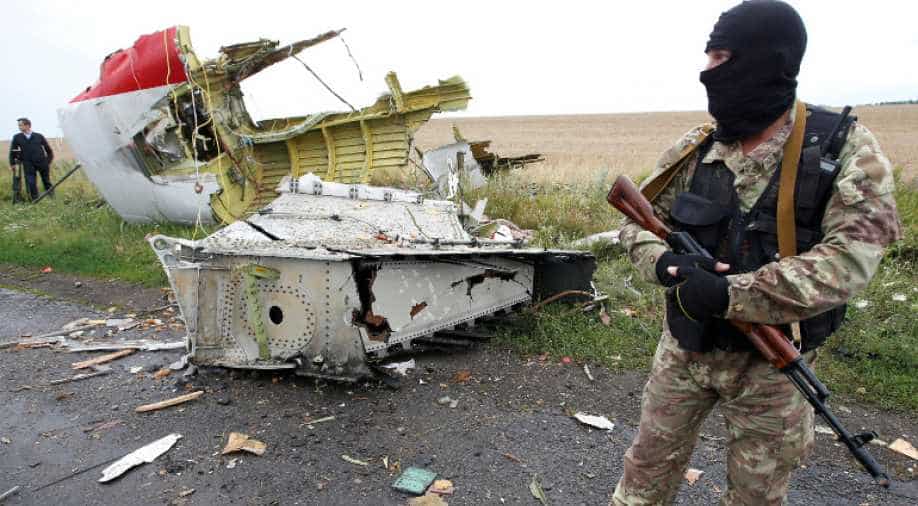 Crash site of Malaysia Airlines flight MH17, near the village of Hrabove in Donetsk. Photograph:( Reuters )

Three Russians and a Ukrainian are on trial over the 2014 crash of the Malaysia Airlines jet in rebel-held eastern Ukraine with the loss of all 298 people on board, 196 of the Dutch.

Dutch prosecutors have accused Russia of trying to sabotage the investigation into the downing of Malaysian Airlines flight 17 in Ukraine in 2014, saying this has cast ''a dark shadow'' over the impending trial of four suspects.

Three Russians and a Ukrainian are on trial over the 2014 crash of the Malaysia Airlines jet in rebel-held eastern Ukraine with the loss of all 298 people on board, 196 of the Dutch.

Moscow had tried to track down witnesses in the trial that started in the Netherlands, leaving some in fear for their lives in case they were identified, prosecutors said.

"There are clear indications that Russian security services are actively attempting to disrupt efforts to establish the truth behind the shooting down of flight MH17," prosecutor Thijs Berger told judges.

Russian spies had also tried to hack Malaysian and Dutch authorities investigating the crash, he said.

"Seen as a whole, this information casts a dark shadow over these proceedings," Berger said.

Relatives of those who died have repeatedly called for the trial to examine the role of Russia in the crash.

The case was adjourned for two weeks and will resume on 23 March.

MH17 was flying from Amsterdam to Kuala Lumpur on 17 July 2014 when it was shot down by a missile fired from territory held by pro-Moscow rebels amid fighting in eastern Ukraine.